A conceptual piece of flag art was flying full staff in front of Spooner Hall at the University of Kansas in until local Republican politicians called for its removal. In a frightening, and all too common act of blind political compliance, the university’s powers-that-be rapidly complied. Then they caved to the ensuing public outrage—and to scores of humiliating posts on social media and promised to reinstate the installation. And then, they changed their minds again, but not really.

Such is the intersection of art and politics in Lawrence, Kansas—and sadly, it seems, across much of our nation.

The piece, Untitled (Flag 2), was created by artist Josephine Meckseper who was born in Germany. She created the piece by way of a commission from Creative Time (CT) for its’ nationwide Pledges of Allegiance series. The series is ongoing.

About its Pledges of Allegiance project, Creative Time says that the project is a serialized commission of a number of different flags, each one created by a recognized artist.

“We realized we needed a space to resist that was defined not in opposition to a symbol, but in support of one, and so we created a permanent space. The flag seemed an ideal form to build that space around both practically and symbolically,” says Creative Time Artistic Director Nato Thompson.

“Each flag points to an issue the commissioned artist is passionate about. More importantly, they are causes that the artists believe are worth fighting for, and speak to how they might move forward collectively. Conceived in response to the current political climate, Pledges of Allegiance aims to inspire a sense of community among cultural institutions and begin articulating the urgent response our political moment demands.”

The Pledges of Allegiance program officially launched on Flag Day, June 14th, 2017. Each month a new flag has been raised on a flagpole atop Creative Time’s headquarters at 59 East 4th Street in New York City—and at partner sites nationwide.

According to her artist bio, Meckseper uses commercial forms of presentation to demonstrate inextricable influences of consumer culture on society. Meckseper melds the aesthetic language of modernism with the formal language of commercial display, combining them with images and artifacts of historical undercurrents and political protest movements.

Meckseper said of her work, “The flag is a collage of an American flag and one of my dripped paintings which resembles the contours of the United States. I divided the shape of the country in two for the flag design to reflect a deeply polarized country in which a president has openly bragged about harassing women and is withdrawing from the Kyoto protocol and UN Human Rights Council.

“The black and white sock on my flag takes on a new symbolic meaning in light of the recent imprisonment of immigrant children at the border.

“Let’s not forget that we all came from somewhere and are only recent occupants of this country – native cultures knew to take care of this continent much better for thousands of years before us. It’s about time for our differences to unite us rather than divide us.” 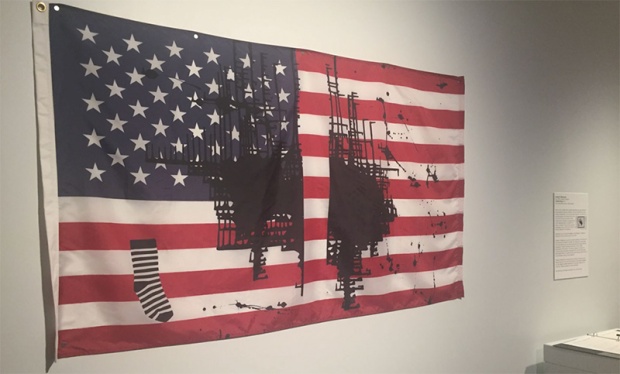 Untitled (Flag 2) no longer flying at the University. It is currently thumbtacked—yes, thumbtacked—to a wall at the Spencer Museum of Art inside the Jack & LaVon Brosseau Center for Learning.

Kansas Governor, Jeff Colyer, continues to call for the flag to be taken down and destroyed.

“Texas vs. Johnson protects this flag from censorship,” said Genelle Belmas, a KU journalism professor who has spent the majority of her career studying First Amendment issues, particularly those focused on the American flag. “It protects the artist’s ability to make a political statement using this piece of cloth.”

Such is the state of art and freedom of
expression in the Sunflower State.