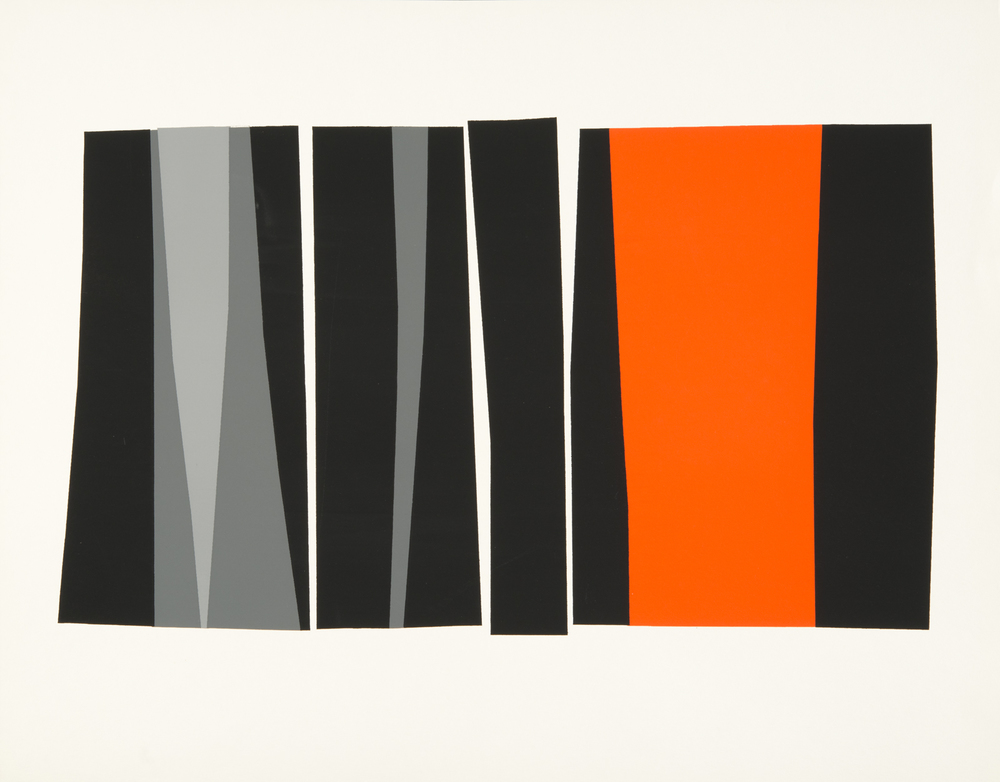 My first thought after unpacking the shipment was, “Well now, that’s a depressing beginning to our weekend.”

I paused, looked at the beat-up shipping case, opened it, photographed the damage, and silently cursed UPS. That didn’t accomplish much. I thought again, and realized that the shipping misfortune might be an opportunity to share Harold Krisel with you.

Jacob and I have—after discovering an intuitively handsome, wonderfully executed body of work—fallen for

the work of artist, Harold Krisel.

While the name Harold Krisel is not bantered about like the names of other American-modern, abstract artists; Jacob and I believe that will change over the next decade or so. Krisel’s work has a direct, strong, empirical voice that seems to speak louder with the passing of time. Learn more:

Harold Krisel was born in Brooklyn, NY in 1920. He studied architecture at the New Bauhaus from 1946-1949 on the G.I. Bill after his discharge from the Army. Twenty-six at the time, Krisel had been interested in art since the 1930s when he arrived in New York—with Carl Holty and Harry Holtzman. He became a member of American Abstract Artists in 1946, and retained that membership for life.

Krisel completed his graduate studies at the Illinois Institute of Technology in 1952.

He worked as an architect at Skidmore, Owings and Merrill until 1966, when he joined the faculty of the High School of Art and Design in Manhattan where he taught architecture until his retirement in 1981.

In 1955 Harold Krisel met his primary patron, Roger Milliken, of Milliken and Company. Krisel was commissioned to design a 26,000 square foot aeration pond for Milliken’s headquarters.

Once he retired, Krisel—in his studio in Bridgehampton, New York—pursued his life-long dream of dedicating himself full time to his vision of art and graphics. In Bridgehampton he began by designing his own house and studio. There he befriended artists Ibram lassaw and Perle Fine and he showed at the storied Elaine Benson Gallery.

On the damage front, we have a received a different piece and when our latest acquisition is properly framed and on the wall, I’ll share it with you here. It’s titled Jagged Form and it’s a powerful expression of perpendicular, parallel concepts juxtaposed by a single wandering, unknown black form that seems to have a destination in mind. Or, without sign-posts, is it lost? Jagged Form is—with its yellows, from the brightest, most saturated lemon to the palest lemonade, to the solid coal-black of the form—a romp in color and contrasts. Jagged Form is the epitome of strong intent; a puzzle likely never to be solved. It is a treat for the eye and a singular hint at the vision of the artist, Harold Krisel.
Artist Harold Krisel

One more thing makes this piece of art so special for us: We acquired it from two of Harold Krisel’s family members. And, the purchase introduced me to Matthew Langille, Harold Krisel’s grandson—a successful artist in his own right. Matthew lives in New York.