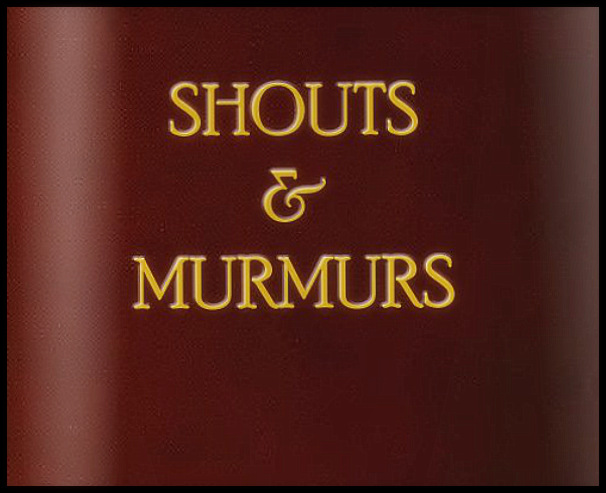 Shouts and Murmurs (1922) by Alexander Woollcott read it at ISSUU.

A couple of times a month I attend a writers meeting in Owings Mills. The Thursday meetings are white-crystalline, xanthine-alkaloid induced exchanges of ideas, concepts, best practices, and minutiae. We discuss broad topics, focus down to the asterisks-level, and often take sudden turns to the personal and the obscure. The meetings could—easily and fondly—be called I knew that; no, I didn’t.

For me, the hour is a clever confetti of the cutting-edge, the historic, the questioning, the remembering and reflecting, the literary, and, the do-you-remember. (Sometimes gardening is discussed. That’s one topic on which I have little or nothing to offer.)

Several Thursdays ago, the dozen-or-so of us attending got into an exceptionally broad exchange. I was in a great conversation—about the Kodak Company, financial big baths, and the gray snow in Rochester—with a fellow writer when I heard, from the other end of the table, David Ogilvy being discussed and I spun my head around so fast that I felt my neck pop. Could the conversations get better?

Yes. They could. And they did. Sort of.

In yet another conversation, I heard an author’s name that brought me to one of these two gents. 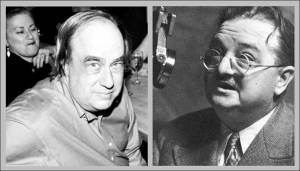 I heard a name: Woollcott.

And, I chimed in with gusto. I injected myself into the conversation with stories about Alexander writing for the New Yorker, his bringing story-telling to his theatre reviews on radio, being a gifted member of the Algonquin Round Table (albeit a long-winded one), and his friendship with the acerbic Dorothy Parker.

My insightful stories were received with blank stares and at least one gaping mouth. I believe that one of the group even cocked her head in that all-too-telling ‘I don’t think so’ pose.

I was saved from certain lifetime, literary humiliation by a fellow writer across the table. He looked at me, looked down, paused, and said, “Oh, you’re thinking of Alexander. We were talking about James Wolcott, you know, from Maryland. He wrote Lucking Out – My life getting down and semi-dirty in seventies new york.”

(I immediately ordered Wolcott’s Lucking Out. It’s next up on my reading list.)

I’ve I looked for an Alexander book to share with the writers meeting members and with you, one that was written by my Woollcott. I’ve discovered that he authored few books, even fewer that are worth a serious read unless you are an ardent and tireless fan of New York theatre, of The Great White Way. Yet, Alexander Woollcott’s command of language is extraordinary and his magazine pieces are written gold.

The man just wasn’t cut from the same writer-cloth as a long-form author. But, the man could review, quip, and perform verbal gymnastics with the best of the best. He once opened a review this way, “The play, Number 7 opened last night; it was misnumbered by five.”

Shortly before Alexander Woollcott died, he said: “I never had anything to say.”
Woolcott was so wrong. But, please, judge for yourself.

I hope you enjoy Shouts and Murmurs, by Alexander Woolcott:

Feel free to pass this post and book along to your writer, theatre, and literary friends. I recreated it from public domain documents. OK then, I’m now off to test-drive the writing of our Maryland Wolcott, James.