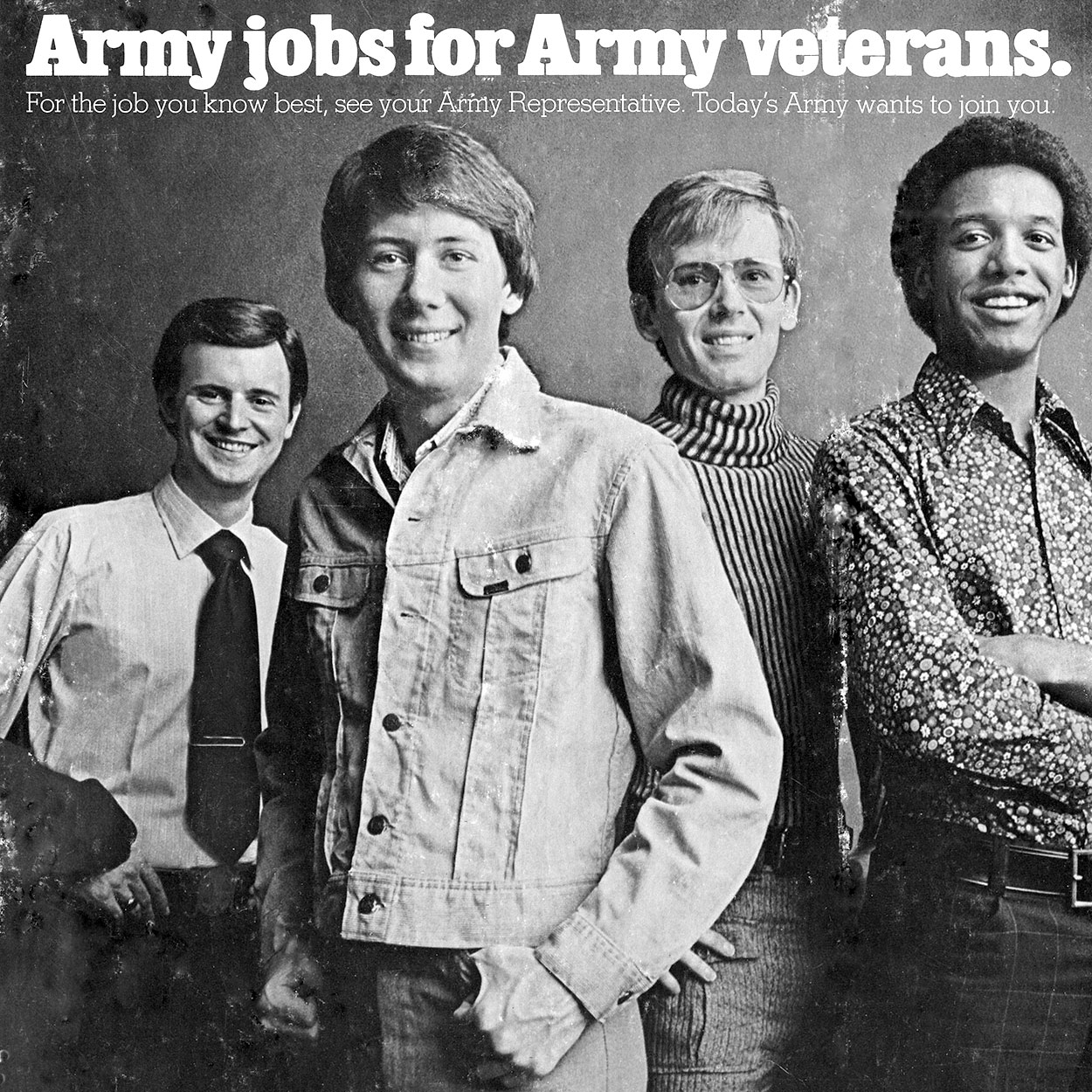 One May morning in 1972 my manager phoned and said, “I’ve got a great gig for you. A four-hour photo shoot next week. It pays more per hour than you’ve ever earned with me. Four hours, twelve-hundred dollars. And, it’s for the Army. Their checks are gold.” The project was for a poster, Army Jobs for Army Veterans.

After a two decade run—through most of the 50s and 60s—the Army’s tag line, Look Sharp, Be Sharp, Go Army! was due to be retired.

In the early 70s the United States Army, more than any other branch of our country’s military, was quietly sticking its collective—terribly uninformed and paralyzingly frightened—toe into uncharted waters. N.W. Ayer & Son, as their advertising agency of record, led the Army’s effort to address diversity in recruiting an all-volunteer force. The slogan, Today’s Army Wants to Join You, was written in 1971 by Ayer’s Ted Regan Jr., Executive Vice President and Executive Creative Director.

General William Westmoreland, when presented with the Today’s Army slogan said, “Do we have to say it that way? Join them?” Ayer creatives had anticipated Westmoreland’s concerns and they collectively responded, “You must say it that way”. Westmoreland reluctantly agreed to the campaign (most likely because it was blindingly expensive and was well underway).

Even though it was a well-thought-out marketing effort, Today’s Army was short-lived and was changed to Join the people who’ve joined the Army less than a year later. Regan also wrote the Army’s follow-up slogan.

The Army’s check was gold, but their wardrobe and makeup departments didn’t have a clue. Not a clue.

Postscript—
Some years later my mom phoned, “Your poster is in Stripes.”
I paused, “I don’t know what that means.”
She sighed, “Last week your sister and I went to the movies. We saw Stripes.”
“Uh-huh.”
She continued on, “I didn’t think it was very funny. I don’t like Bill Murray. Your sister thought it was good, though.”
I was still clueless, “So, I’m not sure why…”
“Your Army poster is in it!”
“The Army poster…”
“You don’t have to believe me. It’s on film.”

Three takeaways:
1) Mothers are always right and,
2) People see every detail in movies and,
3) Ignore the details at your own peril.