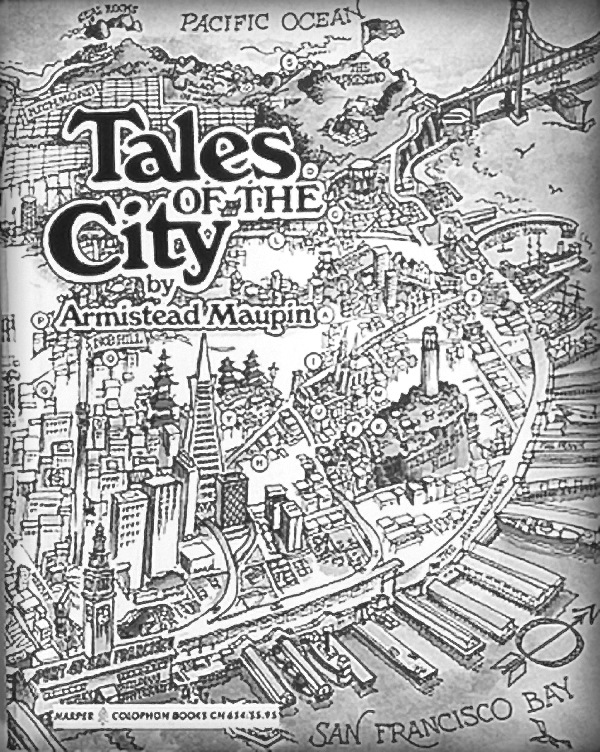 Down the Peninsula at Cypress Lawn Cemetery, a woman in a paisley turban climbed out of a battered automobile and trudged up the hillside to a new grave.

She stood there for a moment, humming to herself, then removed a joint from a tortoise-shell cigarette case and laid it gently on the grave.

Have fun, she smiled. “It’s Colombian.”

― Anna Madrigal, Tales of the City

I consider Maupin’s Tales of the City a Christmas read. I don’t know that anyone else does, but—for me—the book chronicles a span of time when I lived in San Francisco, ran an advertising agency, and—where most every day that I lived there—provided me with a gift of greater tolerance, broader understanding, and no-holds-barred exploration.

Tales of the City was originally serialized in the San Francisco Chronicle—where I began reading it—before it’s 1978 publication in novel form.

The book is a multi-plot narrative which follows the intertwined and complex lives of a group of characters gingerly trying to find their way through a maze of sex, drugs, and longing in 1970s San Francisco. As relationships entwine and sever—as layers of secrets are revealed under other layers of secrets—the narrative explores themes related to human frailty, the nature of family, and the tension between sexual freedom and emotional freedom.

It was a strong, compelling, and often wonderfully teasing read in the mid-to-late ’70s. And, unlike many date-based stories, it remains a solid book today. Solid and fun—and for me reminiscent of a special time. The story ends with some cheers and some tears at a Christmas party on Barbary Lane and a few moments of humming at a grave.

Tales of the City, was produced as a mini-series by the UK’s Channel 4. was first screened in the UK in 1993, and then shown on PBS in the US in January 1994. Olympia Dukakis was the perfect Anna Madrigal—of course, I think Dukakis on-screen is the perfect as any character.

The mini-series is on YouTube in chapters at: Tales of the City.

#Armistead Maupin#Author#book#Christmas#Remembering#Tales of the City