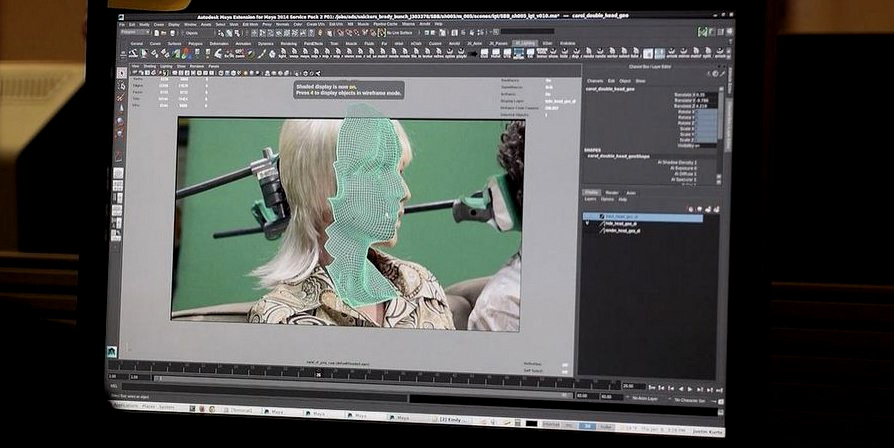 Last week, Ian Failes posted an article on the fxguide website that provides some great insight into the making of the Snickers’ Brady Super Bowl commercial. I’m sharing it with you here. If you’re involved in film or video production, fxguide and fxphd are worth a website visit and a  Facebook follow.

Ian Failes is the author of vfxblog and it’s a chock-full-of-information web destination, also.

How they did it
By Ian Failes

In a new take on the ‘you’re not yourself when you’re hungry’ Snickers campaign, Danny Trejo steps in as Marcia Brady on the set of The Brady Bunch, while Steve Buscemi makes a surprise cameo as Jan. The Mill combined real footage, on-set matching plates and mouth replacements to make the spot possible—here’s how—and also how incredible voice actors dubbed the new lines.

Agency BBDO New York and production company O Positive worked with The Mill early on to ensure the shots could be completed. After the script stage, Arcade Edit produced a rough montage from Brady Bunchtelevision show footage. “Once we had that edit,” relates Mill senior compositor Nathan Kane, “we built a little previs of all the camera lenses and we built the set digitally to try and figure out the spatial representation of that old Brady Bunch set, so on the day they would have it replicated as closely as possible.”

Production created a replica set for Trejo to perform in, and for stand-ins for Mr and Mrs Brady to recline on a sofa – helping Trejo with eyelines. Similarly, Buscemi was filmed on a stair case set piece that matched the dimensions and lighting of the stair case in original footage of Jan. “One important thing was matching the lighting from the original footage,” notes Kane. “There are shadows everywhere on the footage so we matched those in our shots, which really helps on the final comp.”

Here’s where some of the most subtle visual effects of the spot came in. Not only were Trejo and Buscemi comp’d in and made to ‘inhabit’ the original footage, but Mr and Mrs Brady, and later Marcia Brady, were augmented to say new lines.

The stand-in actors – who had been cast for similar shaped mouth, chin and lip features – were filmed against greenscreen as lock-offs. “We lined them up in the exact same position with eyeline, camera height of the lens all matching exactly,” explains Kane. “We shot them against greenscreen with their head locked in position as much as we could – they had a head rest to lean against so they wouldn’t move their head as much.”

This was captured on an ARRI Alex and three surrounding Canon 5D witness cameras. “It gave us a full perspective of their jaw and mouths,” says Kane. “We could then re-project that footage later on to get that right angle. We were very aware that if say Mrs Brady moves her head at different angles then we needed each perspective. We also shot them with tracking markers on their face so we could stabilize their head. It was also a really good reference point while we were tracking them on to make sure that they were locked as much as possible.”

Tracking for the mouth replacements took place in PFTrack and was then refined in Flame. “One of the biggest concerns was how easy to track the super grainy footage,” relates Kane. “It was shot on 35mm, probably put onto DigiBeta and then encoded to MPEG and made a ProRes somewhere. So there’s all this compression and grain that you’re fighting against. But it actually tracking pretty well. It doesn’t look that bad – I was surprised how well it stood up.”

The body double would say the necessary lines; this would be tracked and transplanted onto the footage of Florence Henderson as Mrs Brady and Robert Reed as Mr Brady. But the actual voice of Henderson heard in the spot was a character voice-over artist. “They did such a good job finding her – it’s so believable,” says Kane. “Every time one of the Brady characters is saying something it’s always a mouth replacement. They would re-record in a sound booth her saying that line. We asked her to say it in a certain way to match the mouth we had shot.”

For Marcia’s appearance – a shot where she would be holding a Snickers and saying ‘Better’, suitable footage of the actress actually came from a scene filmed in her bedroom. The trickery then became both a head replacement and mouth replacement job. Explains Kane: “We shot a double for Marcia, who we cast who looked as much like her as possible, saying ‘Better’ and holding a Snickers. Then we replaced her head with Marcia’s head and hair and put in the mouth of the double with her saying ‘Better’, with voice over artist’s track of ‘Better’.

The final step was to match the imperfections and artefacts in the original footage. “The shots of Trejo and Buscemi were done on the Alexa so they were super clean and crisp,” describes Kane. “We really spent a lot of time analyzing the original footage and the grain. At same points we de-grained and de-noised a lot of the Brady Bunch footage, and then re-applied our own grain and noise on top of everything. So it gave it a really uniform grain structure.”

Kane notes that, since significant care was taken to find the right takes, and the actors were filmed on sets matching the original, the final result was better. “I wanted to build as much as we could practically,” says Kane, “then shoot our new stuff and then blend that into the actual footage. So it’s not just taking Trejo shot against greenscreen and plonking him in. So the whole fireplace and the table in front of him is all what we shot on set – matching to the original production design. You get real interaction when he throws the axe down and real shadows. I wanted to use as much of our footage so it would make for a more realistic comp later on.”