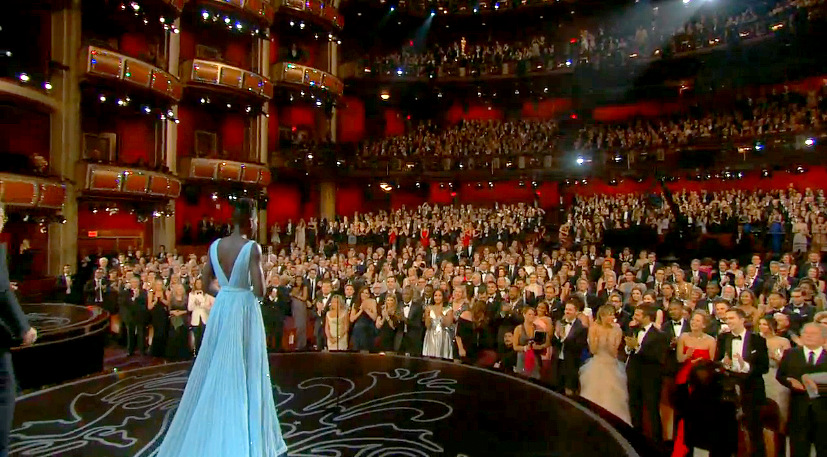 And here’s a link to a great slideshow of handwritten responses to five questions that were asked of artists nominated for the 87th Academy Awards. The actors’ handwriting is as interesting as their answers. Perhaps, more so. The nominees who typed in their responses cheated; that’s my story and I’m sticking to it.

The following release is from the Academy. Enjoy the show.

Far from the eagerly anticipated and globally televised event it is today, the first Academy Awards ceremony took place out of the public eye during an Academy banquet at the Hollywood Roosevelt Hotel. Two hundred seventy people attended the May 16, 1929 dinner in the hotel’s Blossom Room; guest tickets cost $5. And there was little suspense when the awards were presented that night, as the recipients had already been announced three months earlier.

That all changed the following year, however, when the Academy kept the results secret until the ceremony but gave a list in advance to newspapers for publication at 11 p.m. on the night of the Awards. This policy continued until 1940 when, much to the Academy’s surprise, the Los Angeles Times broke the embargo and published the names of the winners in its evening edition – which was readily available to guests arriving for the ceremony. That prompted the Academy in 1941 to adopt the sealed-envelope system still in use today.

In 1953, the first televised Oscar ceremony enabled millions throughout the United States and Canada to watch the proceedings. Broadcasting in color began in 1966, affording home viewers a chance to fully experience the dazzling allure of the event. Since 1969, the Oscar show has been broadcast internationally, now reaching movie fans in over 200 countries.

As the world marches forward, so has The Oscars. Oscar.com has long been an online companion to the broadcast, and Oscar’s 2011’s second-screen experience garnered the Emmy Award for Outstanding Creative Achievement in Interactive Media. As time-honored Oscar traditions keep in step with new technology, 2015 Oscar content will be available on a multitude of devices to complement the 87th Academy Awards, airing LIVE OSCAR SUNDAY Feb 22 7e|4p on ABC.

Designed to be the ultimate complement to the broadcast, The Oscars Backstage will also be live at 7 p.m., ET/4 p.m., PT in the US on the WATCH ABC app for desktop and mobile devices. Presented again this year by Samsung Galaxy®, The Oscars Backstage lets fans select from three channels that will pull from more than 20 live cameras strategically placed on the Red Carpet and throughout the backstage areas of the Dolby Theatre, providing fans with insider views into the most memorable moments of the night. Popular cameras positions include the Director’s Cut (including Thank You cam), Audience and Backstage.

Additionally, fans who have verified with a participating pay TV provider in one of the eight ABC Owned markets – Chicago, Fresno, Houston, Los Angeles, New York City, Philadelphia, Raleigh-Durham and San Francisco – can access a live feed of the Oscars preshow, full awards telecast and “Jimmy Kimmel Live: After the Oscars” as part of the regular WATCH ABC service. Live streaming is currently available through Comcast, Cablevision, Cox Communications, Charter Communications, DISH, DirecTV (coming soon), Midcontinent Communications, Verizon FiOS, Google Fiber and AT&T U-verse, among others. Once aired, the full Oscars telecast will be available on demand via WATCH ABC for verified viewers for three days. WATCH ABC can be accessed from Oscar.com, ABC.com, or via the WATCH ABC app, which can be downloaded for free at Google Play and the App Store. Verified viewers then log in using their cable or satellite subscription username and password.