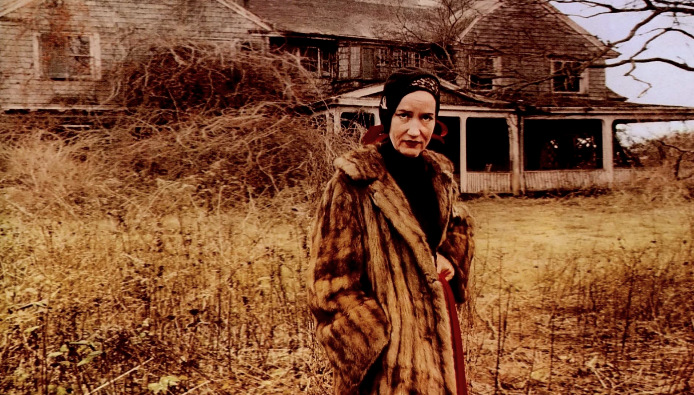 Big and Little Edie. You won’t want to miss this. Only the film has been cleaned up—their story and thinking remain cluttered and obtuse and can suck you in like a black hole.

At the Charles Theatre for three showings only, a new restoration of Albert and David Maysles’s 1976 study of spirited decrepitude.

Shot on 16mm, and still grainy, Grey Gardens is the story of the two generations of Edith’s swanning and dancing about their crumbling mansion. The film remains elusive and dreamlike no matter how the celluloid has been brightened and tightened. The Maysles brothers pioneered “direct cinema”. This study captures uniquely happy and disturbing moments in life of Mrs. Beale and her daughter “Little Edie” Beale who were directly related to the Bouvier/Kennedy family. The story of their life in a run-down mansion in East Hampton is fascinating, engrossing, and memorable.

Here’s the original trailer for the film’s showing at the Paris Theatre in New York City, 1975.

“A stunner: Half humorous, half horrific and 100% mesmerizing…upstages anything in Pink Flamingos.”
(NY Post)

“Sparkling! To watch the Maysles’ 1976 vérité masterpiece, uninflected by a sentimental soundtrack or editorializing of any kind, is to be invited into a terrible mystery… the beauty of this film is the dignity it imparts to the Beales, trapped in their pasts.” (Joshua Rothkopf, Time Out New York)