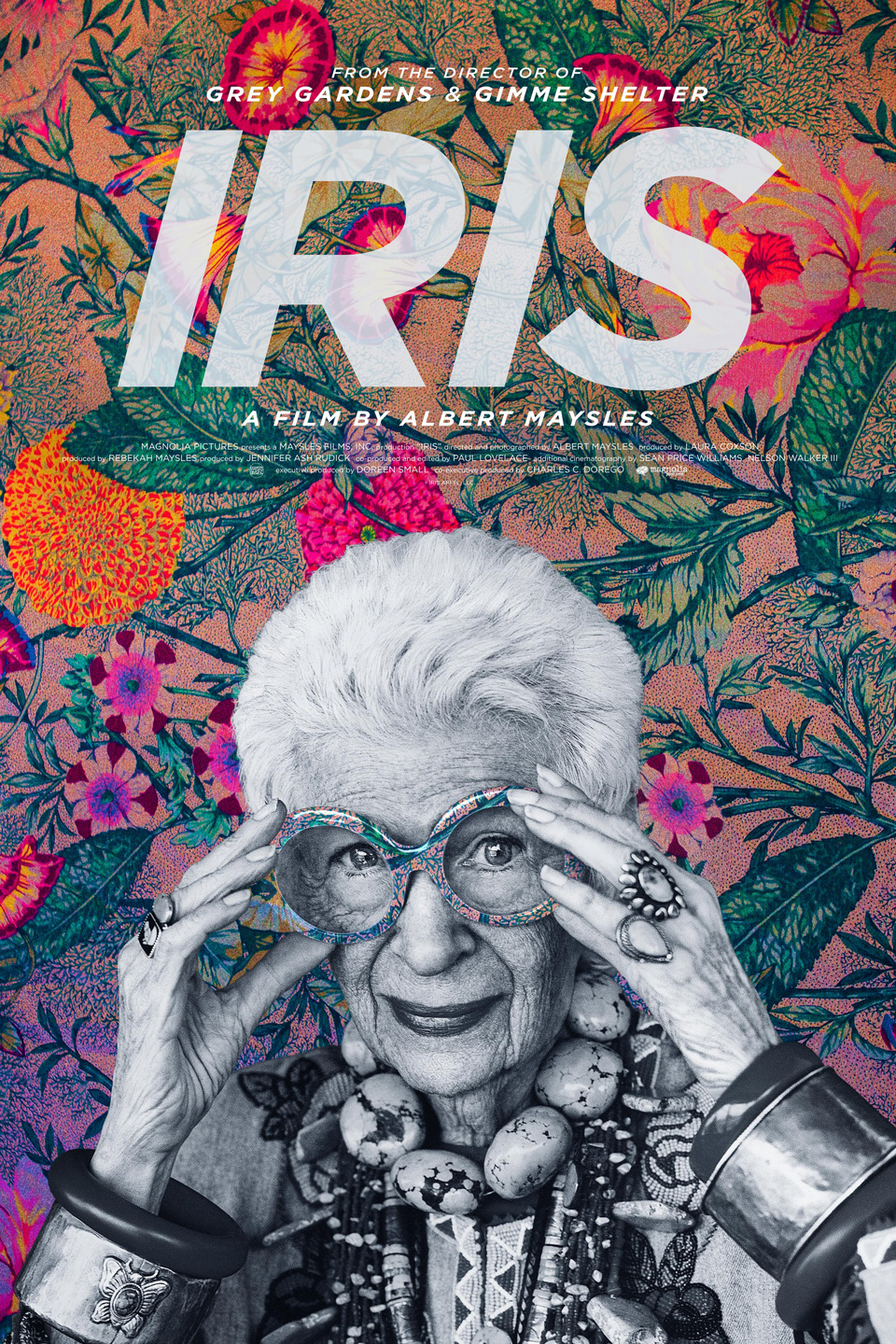 Tickets just went on sale for the showings at The Charles. Here’s the link.

Variety‘s Ronnie Scheib on Iris,
“It is more important to be happy than to be ‘well dressed,’” she resoundingly declares. Not only does her uniquely mad approach to fashion make her happy, but a shared, slightly absurdest sense of style also cements her successful 66-year marriage to hubby Carl, who turns 100 during the course of the film. If the couple’s spacious Park Avenue apartment is dedicated to their shared passion, housing several department stores’ worth of clothing and accessories, their Florida digs reflect a more playful love of the freaky, kitschy or just plain ridiculous.  In the words of good friend and photographer Bruce Weber, “It’s the perfect house for two children.”

Maureen Callahan at The Hollywood Reporter writes,
This “rare bird of fashion,” as she is now known, first came to prominence in the 1950s, when she and her husband, Carl—who turned 100 during filming—founded Old World Weavers, a textile company hired by nine presidents for White House restorations. In Iris, we see Apfel mingle with Bruce Weber, Jenna Lyons, and Kanye West, while behind the closed doors of her Park Avenue apartment she quietly grapples with old age. Fashion, she says, never keeps her up at night. “Matters of health and things like that [do]. Things that are really important.”

The Observer’s Gabby Wood share’s this about Iris Apfel in a wonderfully written story,
There’s a wonderful drawl to Apfel’s speech, which has less to do with any particular accent than with timing; she’ll say something you think is surprising, and by the time her voice has finished with it, you’ve just about caught up with its self-evidence. Her wit dries out slowly.

Despite her fondness for rare sartorial finds, there was a phase in the early 50s when she “never got dressed”, as she puts it. “I had one very bad experience,” Apfel remembers. “As a decorator, I was dealing with all these shallow, silly women. Lots of them used to congregate in the showroom after a day of shopping. I had some doctors’ wives, and one day one of them was wearing some beautiful alligator pumps. One of the ladies said: ‘Oh my goodness, those are great-looking.’ She said: ‘Oh yes, two heart attacks.'” A couple of people had had to die, or almost die, in her husband’s arms for those shoes. “So I took to wearing a black tunic with black stockings, high black boots, a hood. It was like a revolt.”

Iris Apfel, at home in her skin

I’ve been a fan, an admirer, and a little smitten with Iris Apfel since the first time I saw her in New York—in the 70s. The Maysles’ documentary is probably as close as I will ever get to knowing the woman, but her take on individuality will be with me, intimately, as long as I live.

Free spirits with style are muses that must be revered. Iris is one of mine and I do.

Cheers, Iris. Cheers. I’ll see you at The Charles.

About The Charles:
The 108-year-old structures which house The Charles boast a rich history. Designed in 1892 by architect Jackson C. Gott for the Baltimore Traction Company, the Beaux-Arts buildings were originally designed to be a cable car barn (north side) and a powerhouse (south side). The buildings served as cable car facilities for four years after which they became a streetcar barn, a bus barn, a library for the blind, and the Famous Ballroom. In 1939, the Times Theatre opened on the site as Baltimore’s first all-newsreel movie house. The theater was re-named the Charles circa 1959 and became a calendar revival house in 1979. The Charles remained a single-screen theater until 1999, when a dramatic expansion was completed to accommodate four additional screening rooms. The new five-screen Charles has a spacious, comfortable lobby and the four new screening rooms have stadium seating. The original auditorium still has 485 seats and has been altered only slightly.

One thought on “Here’s the first trailer for Albert Maysles’ IRIS. The documentary screens at The Charles in May.”