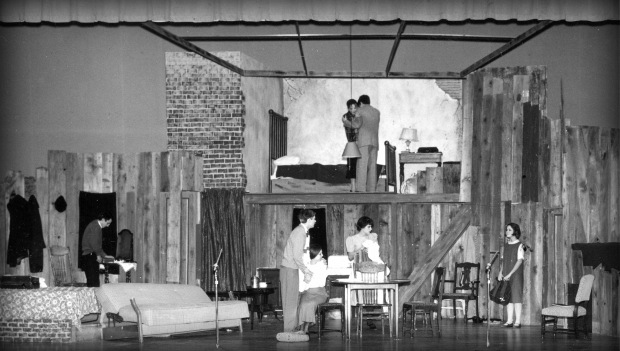 Stage direction: The curtain rises on an empty stage. It is late afternoon, November 1945. The rooms are dusty, the curtains in rags. Chairs and tables are overturned. The door at the foot of the small stairwell swings open. MR. FRANK comes up the steps into view. He is a gentle, cultured European in his middle years. There is still a trace of a German accent in his speech.

He stands looking slowly around, making a supreme effort at self-control. He is weak, ill. His clothes are thread-bare. After a second he drops his rucksack on the couch and moves slowly about. He opens the door to one of the smaller rooms and then abruptly closes it again, turning away. He goes to the window at the back, looking off at the Westertoren as its carillon strikes the hour of six; then he moves restlessly on. 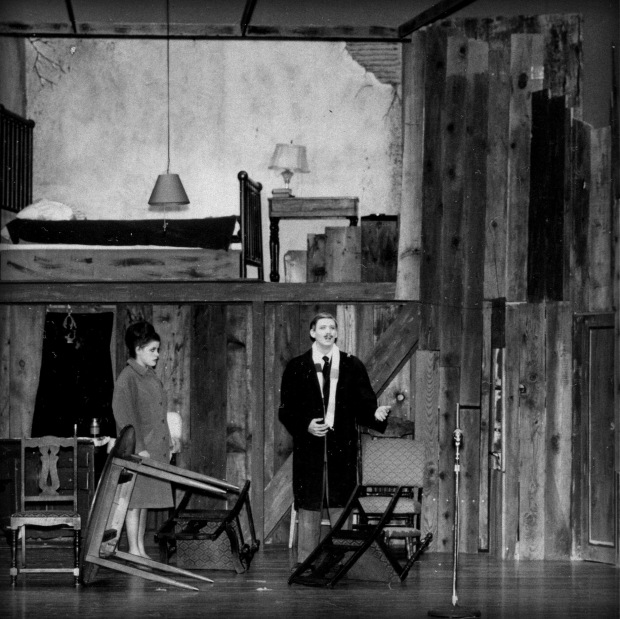 From the street below we hear the sound of a barrel organ and children’s voices at play. There is a many-colored scarf hanging from a nail. MR. FRANK takes it, putting it around his neck. As he starts back for his rucksack, his eye is caught by something lying on the floor. It is a woman’s white glove. He holds it in his hand and suddenly all of his self-control is gone. He breaks down crying.

Our drama teacher, Ruth McCormick, cast me as Otto Frank; Jan Chandler Randle played my daughter Anne. The set was a wonderful piece of heavy-duty carpentry and it provided quite a workout as we used the crawlspace, the backstage up and down stairs, and onstage steps.

No production detail was left to the imagination. The prop list was specific to minutia for every Act and Scene.

And, no detail was more important to our Kansas production—and me—than the scarf that I wore in that play.

It was a surprise gift from Jan Chandler to me at final rehearsal. She knitted it by hand for me—just as Anne Frank had knitted the one for her father decades before.

I didn’t need to know anything about Method Acting to call up tears every time that I looked at it. The scarf, its context, and the horrific history of those years in eastern Europe did that for me.

UPDATE: 5.29.15
It’s amazing what I found going through a file of photos and clippings that my mom kept. Here’s the entire cast and tech list for the production. I’m blown away by this phrase from the story that appeared in the school newspaper, The Stampede, “The story is not fiction…” 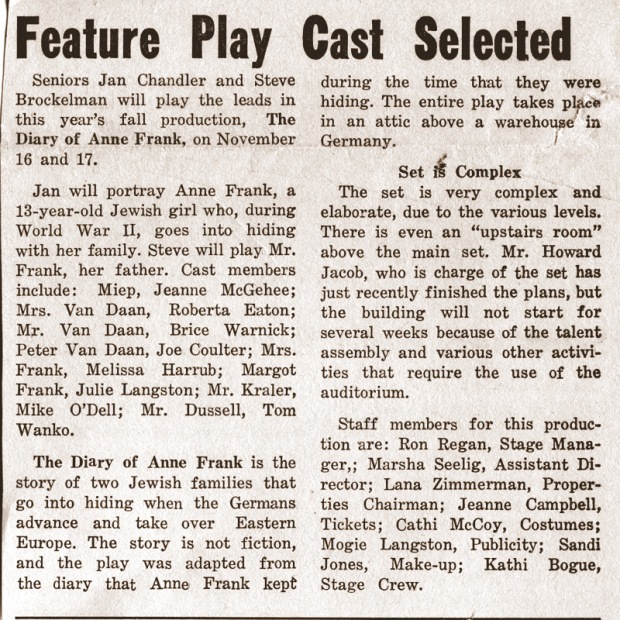