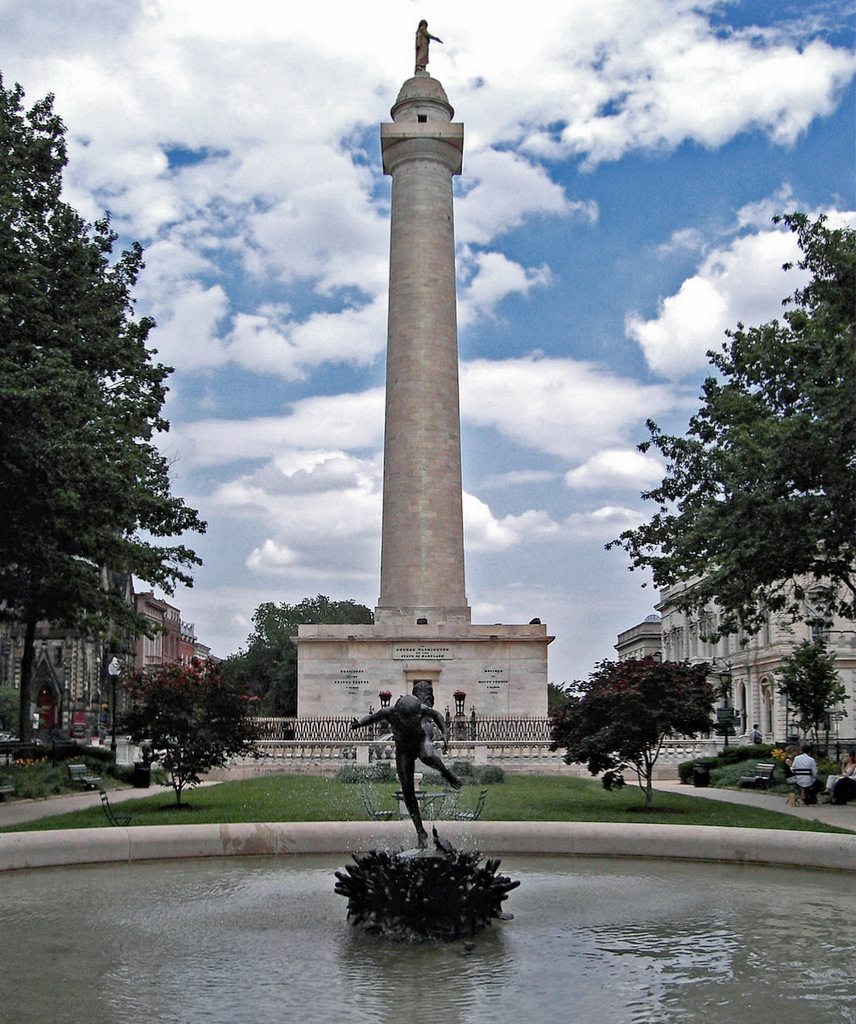 I received a note from The Historic Charles Street that I though you’d enjoy:

With its cornerstone laid on July 4, 1815, Mount Vernon’s Washington Monument became the first public monument to honor George Washington and the ideals of American Democracy he represented.

This July 4, Baltimore is celebrating this special time in American history with the Monumental Bicentennial, a one-day celebration featuring the official reopening of Baltimore’s restored Washington Monument!

Presented by the Mount Vernon Place Conservancy and Bank of America, the event will take place from 8:30 a.m. to 5 p.m. and includes a naturalization ceremony, an official re-dedication and a ribbon cutting ceremony. An old-fashioned country fair follows with entertainment, children’s activities, baking contests, delicious food and beverages and more. The Monumental Bicentennial is produced by the Baltimore Office of Promotion & The Arts in partnership with the Mount Vernon Place Conservancy. Admission is free.

Beginning at 8:30 a.m. on July 4th, a naturalization ceremony will take place wherein 40 people will become American citizens. The Peabody Institute of The Johns Hopkins University and the Baltimore School for the Arts will perform during this ceremony.

After being closed in 2010, the restored Washington Monument will reopen with an official re-dedication ceremony and ribbon cutting at 10:45 a.m. The ceremony program includes live performances from the Maryland Defense Force Band and Fort McHenry Guard Fife & Drum Band.

There will be Colonial-style food and picnic fare including Dooby’s fried chicken and corn bread, barbecue by Jurassic Pork, Brewer’s Art Monumental Ale, grilled oysters by Ryleigh’s Oyster, flights of whiskey and Washington State wines from Spirits of Mount Vernon and ice cream by The Charmery.

Pahl’s Farmstead will feature a farmer’s market and petting zoo with farm animals on-site. There will also be a baking competition where local bakers compete with recipes for the best cornbread, cherry or peach dessert.

But the festival isn’t limited to Mount Vernon’s Parks. Visitors are encouraged to venture out into the neighborhood where many Mount Vernon institutions and businesses will host activities such as a neighborhood scavenger hunt, organ performances and tours at the Engineers Club and tours of the George Peabody Library and Peabody Institute. At the Walters Art Museum, you can design your own red, white, and blue pin using paints, sparkles, and more. Then, go inside the museum and find Washington’s portrait to receive a special addition!

Camp Center Stage and the Baltimore School for the Arts will perfom in the park squares. The Mount Vernon United Methodist Church will be open for the day. The Maryland Historical Society will exhibit artifacts recovered from not one but two time capsules, one hidden away in the 1815 cornerstone and another placed during the 1915 centennial celebration. Also on view will be documents related to Baltimore’s very special Monumental Year of 1815 in an exhibit entitled “Treasures Unearthed From Baltimore’s Washington Monument.”

It truly will be a neighborhood-wide event! So come out and celebrate one of the most beautiful urban spaces in America, and its special monument to our First President. For more information about the July 4th celebration, visit Monumental Bicentennial.