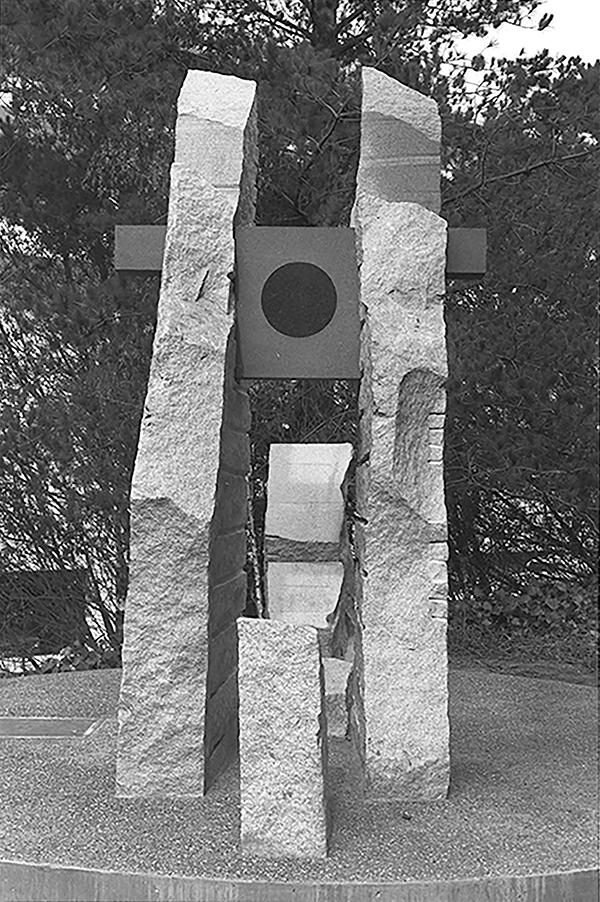 You’ll also need to do some site planning and ground prep, but planting a sculpture takes some effort.

A famed Richard O’Hanlon sculpture, Sunstones I, is up for auction. O’Hanlon auction:

Sunstones I, granite sculpture created through the collaboration of artist Richard O’Hanlon (1906-1985) and astronomer David Cudaback will be auctioned on Sunday, October 18th.

Richard O’Hanlon (1906-1985) was born in Long Beach, California. In the early 1930s, he served as an apprentice to Diego Rivera at the San Francisco Art Institute, assisting with the large fresco that remains there today.

O’Hanlon taught at the California College of Arts & Crafts (now CCA). In 1948 he became Professor of Sculpture at the University of California at Berkeley, where he taught until his retirement in 1973.

Opening bid is set at $500. The auctioneer estimates the price realized to be in the $2000. range.

The O’Hanlon Center for the Arts, located on two acres at the base of Marin County’s Mount Tamalpais, honors the cultural legacy of Ann and Dick O’Hanlon.

This is their biography of Richard O’Hanlon:

Richard “Dick” O’Hanlon was a multi-talented and prolific visionary and artist.

Dick’s grounded common sense, coupled with his ability to pull shapes out of stone, provided a wonderful stability for Ann. Dick worked to create a natural, but slightly-tamed, garden and grounds. His handiwork and horticultural skill are still evident throughout the Center.

The archives contain many working drawings, and the grounds abound with working models.

Dick (1906-1985) was born in Long Beach, California. His father was from Ireland, and his mother from Iowa. In the early 1930s, Dick served as an apprentice to Diego Rivera at the San Francisco Art Institute, assisting with the large fresco that remains there today. Ann and Dick met at the Art Institute. Dick taught at the California College of Arts & Crafts (now CCA). In 1948 he became Professor of Sculpture at the University of California at Berkeley, where he taught until his retirement in 1973.

An example of Dick’s extraordinary work can be seen outside U.C. Berkeley’s Lawrence Hall of Science, where his 15-foot, 16-ton sculpture, “Sunstones II,” stands.

It is a sculpture that helps us restore our sense of position on the Earth and in the solar system, and functions as a calendar for the years and centuries. Its creation was made possible by private donations, and it is dedicated to the memory of Isabella and Hans Karplus.

Among his many exhibitions was a major show of Sierra granite pieces at the Santa Barbara Museum of Art in 1969.

Throughout the years, local artists and art students from Dominican College, where Ann founded the Art Department, and from the University of California, gathered regularly and informally to share their work and ideas about art in this wonderful and inspirational setting.

After Dick died in 1985, his studio was converted into the O’Hanlon Gallery space. Each month, a different artist or group presents an exhibition. Each January is reserved for an O’Hanlon Center Members Group Show.

O’Hanlon Center for the Arts is committed to continuing the work of Dick and Ann O’Hanlon through workshops, lectures, exhibitions and building a diverse community of members.

The only time that I ever question highrise living is when an outstanding piece like this comes along at a price like this.