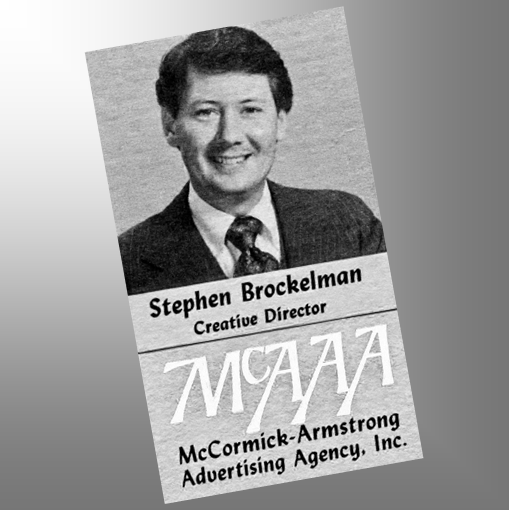 On my first day on the job, I was photographed for my official agency image—the agency had a large in-house photo studio and a full-time photographer—so my mug could be slapped on a business card. To this day, that card remains the only vertical, half-fold-open, letterpress (with white foil stamp), back-printed business card that I’ve ever had. (Can you say, “Everything but the kitchen sink?”)

I signed off on the press proof nearly 40 years ago. The proof was printed on a fairly smooth, tan card stock. It wasn’t totally hateful. I did question the format, the font, and the fold. I also asked why the ID lines appeared left of center while the McAAA logo seemed to be set a bit right. I questioned quite a bit, actually.

The agency’s president, Fred Menefee, said, “It’s a legacy corporate design. If you want to suggest something else, we’re open to seeing what you’ve got.” Mc-A’s corporate colors were orange, white, and black.

When the actual cards arrived on my desk a few days later, all twenty-five hundred of them, I was horrified. Somehow, I’d managed to go through the entire hiring process without ever seeing an actual McCAAA business card.

My tenure with the agency was rather short. I was unsuccessful in changing their business card design, corporate color system, or their approach to 60s-style copywriting. (However, I did manage to move the agency forward about a decade by changing its presentation format from Kodak slide carousels to videos, copywriters from IBM Selectircs to word processors, and ordering the firm’s first video camera system.)

Still, each year, each October—for the past three-and-a-half decades—as Halloween approaches, I remember that orange card sporting my orange face . . . and I smile a little.