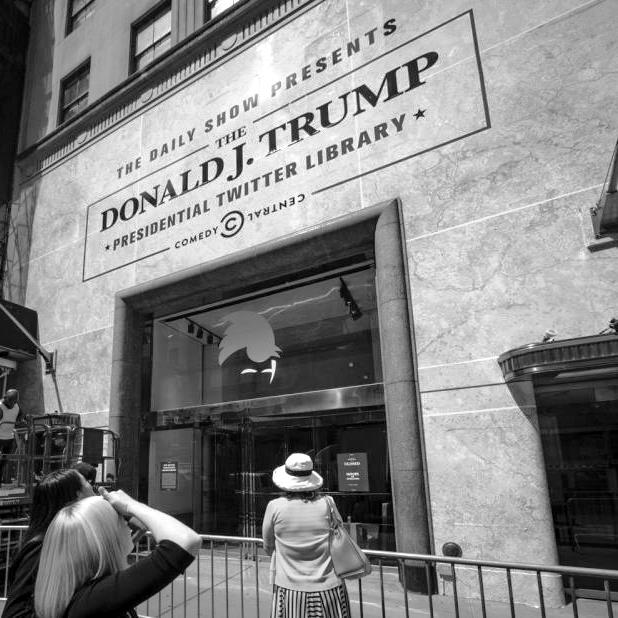 Even the press release from Comedy Central is a laugh riot:

Every president since Franklin D. Roosevelt has been honored with a meticulously curated memorial library commemorating the documents of historical value crafted during his time as leader of the free world. Continuing this hallowed tradition, and seeing no need to wait for him to leave office, The Daily Show will honor our current president with The Daily Show Presents: The Donald J. Trump Presidential Twitter Library, the first of its kind, showcasing our Commander in Chief’s preferred vessel for communicating with the public, his Twitter feed.

The library will feature visual installations and a fully interactive, hands-on experience for hands of all sizes, giving patrons the once-in-a-lifetime opportunity to memorialize and celebrate the many “unpresidented” moments of President Trump’s Twitter history.

Select exhibitions housed in the Presidential Twitter Library include:

Trevor Noah, Steve Bodow, Jen Flanz and Jill Katz are the Executive Producers of The Daily Show with Trevor Noah with Eric Davies, Pam DePace, Ramin Hedayati, Justin Melkmann and Elise Terrell as Supervising Producers. Zhubin Parang is the Head Writer with Daniel Radosh as Senior Writer. The series is directed by Chuck O’Neil. Sarah Babineau is the Executive in Charge of Production for Comedy Central.

One thought on “Only this weekend and only in New York: The Donald J. Trump Presidential Twitter Library”