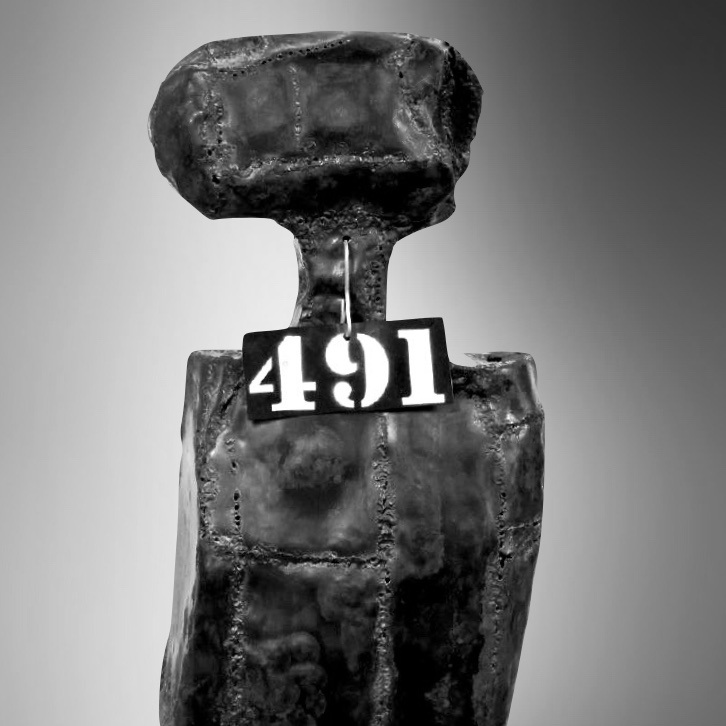 Marian Ruth Agree was born in Detroit, Michigan in 1922. The daughter of William and

Dora Bailies and wife of Philip Agree, she was an artist who worked in metal sculpture, weaving, and painting.

Jewish, Agree was passionate about art, politics, and civil rights and those three causes often informed her sculpture. Those causes certainly merged, and merged powerfully, in the piece we acquired, 491.

The sculpture is a modern, not-so-subtle anti-slavery, pro-freedom statement. The tag “491” hanging from a hook through the subject’s neck references a slave tag.

According to historian and art appraiser, Dr. Lori Verderame, “Slave Tags or slave badges were issued to slave owners, to be worn by their slaves, in and around the seaport and prominent slave trade city of Charleston, South Carolina from the late 1700s to 1865.”

There were laws in place in the early 1800s which allowed slave owners to hire out their slaves. Those laws were in place in southern cities including Mobile, Norfolk, New Orleans, and Savannah.

However, the only southern city that maintained a strict regulatory method of keeping track of the tagged slaves was Charleston.

Slave owners there who wished to rent out the services of their “property” to others for a fee purchased the tags. Slaves were required to wear their tags as an identification marker. Fees for the tags, similar to a license, were based on the abilities and skills of the slave. The registration fee or tax for slave tags brought significant income to the city of Charleston.

By law, the slave had to wear their tag at all times during the calendar year that it was issued.

Agree’s piece is especially important to us as gay men living in the current American political environment. It is a constant reminder that no amount of human oppression—no matter how small—is ever acceptable. It reminds us that freedom is a hard-won concept and we must continue to resist—at any cost—each and every effort to reduce any individual’s liberty, by any group, by any degree.

One thought on “A Marian Ruth Agree sculpture comes to live with us. The subject is dark and the piece, powerful.”