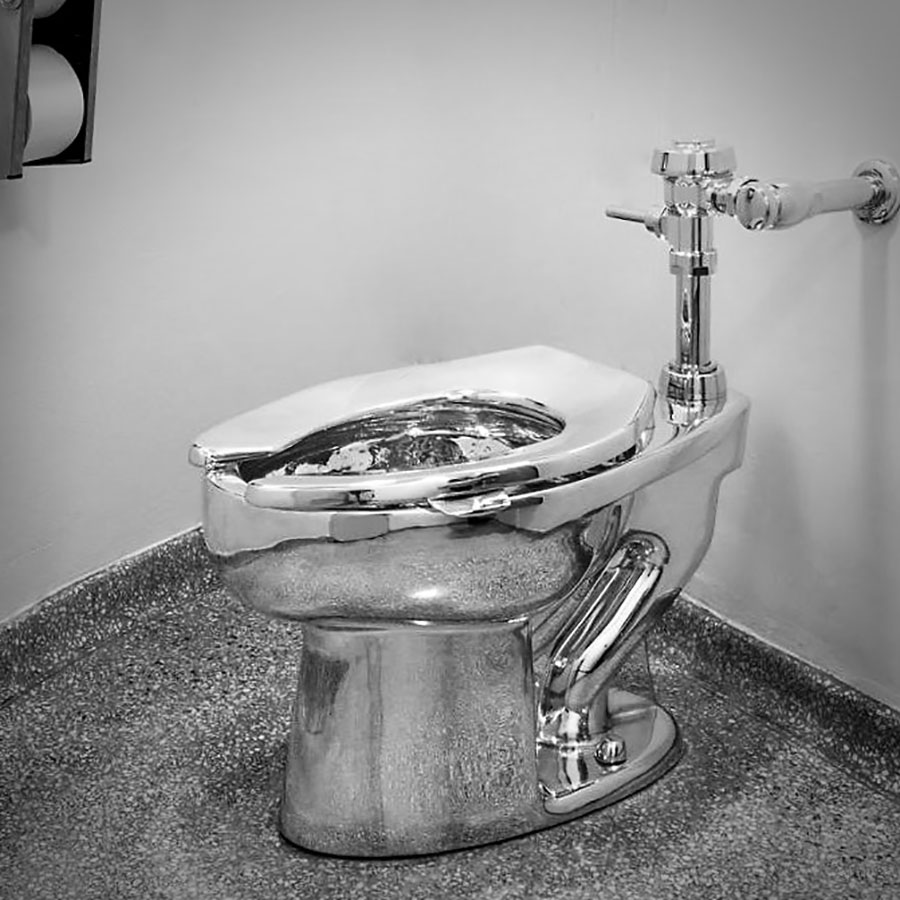 America, the fully functioning gold toilet by Maurizio Cattelan—an 18k representation of the excesses of affluence—was available for all to use in the privacy of one of the Guggenheim’s single-stall, gender-neutral bathrooms. Starting in 2016 and continuing over nearly a year, more than a hundred thousand people waited—sometimes fidgeting—in long, slowly-moving lines for the opportunity to interact—to share a bit of themselves—with the precious potty.

In September 2019, America was installed, on loan from the Guggenheim, at Blenheim Palace in the United Kingdom. It was available for use as part of an exhibition of Cattelan’s works. It was placed in a water closet formerly used by Winston Churchill.

Just days after it was installed in the palace, it was stolen on September 14, 2019. While there were three arrests the following month, the case of the gold toilet heist remains unsolved.

Sarah Rose Sharp, writing for Hyperallergic, says, “Art insurance company Arte Generali saw a solid gold opportunity to penetrate the Italian art market, and has announced their aims to become a top-three player in the next five years via a launch campaign conceived, designed, and photographed by Oliviero Toscani. It features artist Maurizio Cattelan clowning around in the buff with only oversized paper cutouts of his works—including the missing toilet—to protect him.”

After the initial installation of America, the Guggenheim linked the sculpture’s meaning to Donald Trump’s career, writing in September 2016 that “the aesthetics of this ‘throne’ recall nothing so much as the gilded excess of Trump’s real-estate ventures and private residences.”

The Washington Post reports, “The Trump administration has again proposed the elimination of federal funding for the arts and humanities, public television and radio, libraries, and museums. For the third time in as many years, the White House has proposed a federal budget that would shutter the National Endowment for the Arts, the National Endowment for the Humanities, the Corporation for Public Broadcasting—which supports PBS and NPR—and the Institute of Museum and Library Services.”

One thought on “Theft of Maurizio Cattelan’s 18k gold toilet is the story behind a new insurance commercial.”