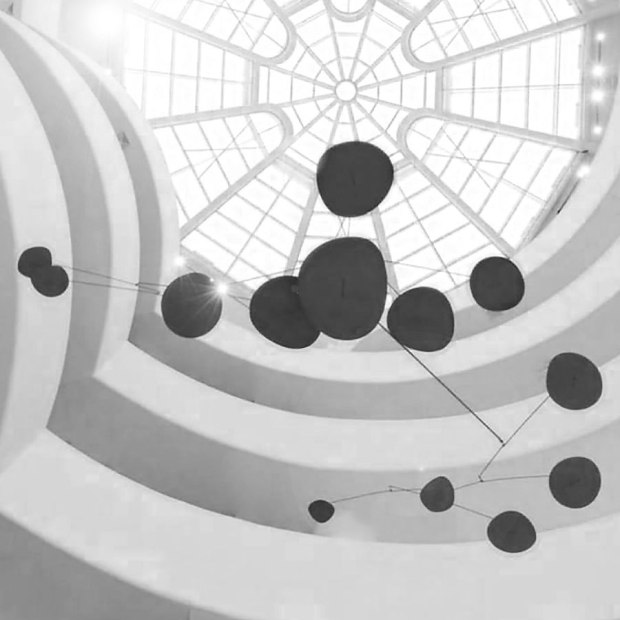 The Guggenheim’s Nathan Otterson, Senior Conservator, Objects, and Tracey Bashkoff, Director of Collections and Senior Curator, describe the demanding process of restoring the Calder mobile, from matching its distinctive red color—a signature of Calder’s—to adjusting how its leaf-like plates “branch out” and move once installed.

Following World War II, Calder returned to the United States. Through the 1940s and 1950s, he chose to distance himself from the abstract artists of the New York School. Calder, known to his friends as Sandy, enjoyed the company of artists who like him, believed that no claims for the underlying meaning or emotional content of abstract expression were necessary.

Jean-Paul Sartre visited Calder’s studio in Connecticut in 1946 and was attracted to the transitory properties of his mobiles and wrote, “Calder establishes a general destiny of motion for each mobile, then he leaves it on its own. It is the time of day, the sun, the heat, the wind which calls each individual dance . . . . One sees the artist’s main theme, but the mobile embroiders it with a thousand variations. It is a little swing tune, as unique and ephemeral as the sky or the morning. If you have missed it, you have missed it forever.”

The Guggenheim notes that Calder studied at the Art Students League in New York and then, like many aspiring artists of his generation, spent time in Paris where he was inspired by Joan Miró’s work and absorbed the playfulness of Dada. It was the French artist and Dadaist, Marcel Duchamp who christened Calder’s hanging sculptures “mobiles.”