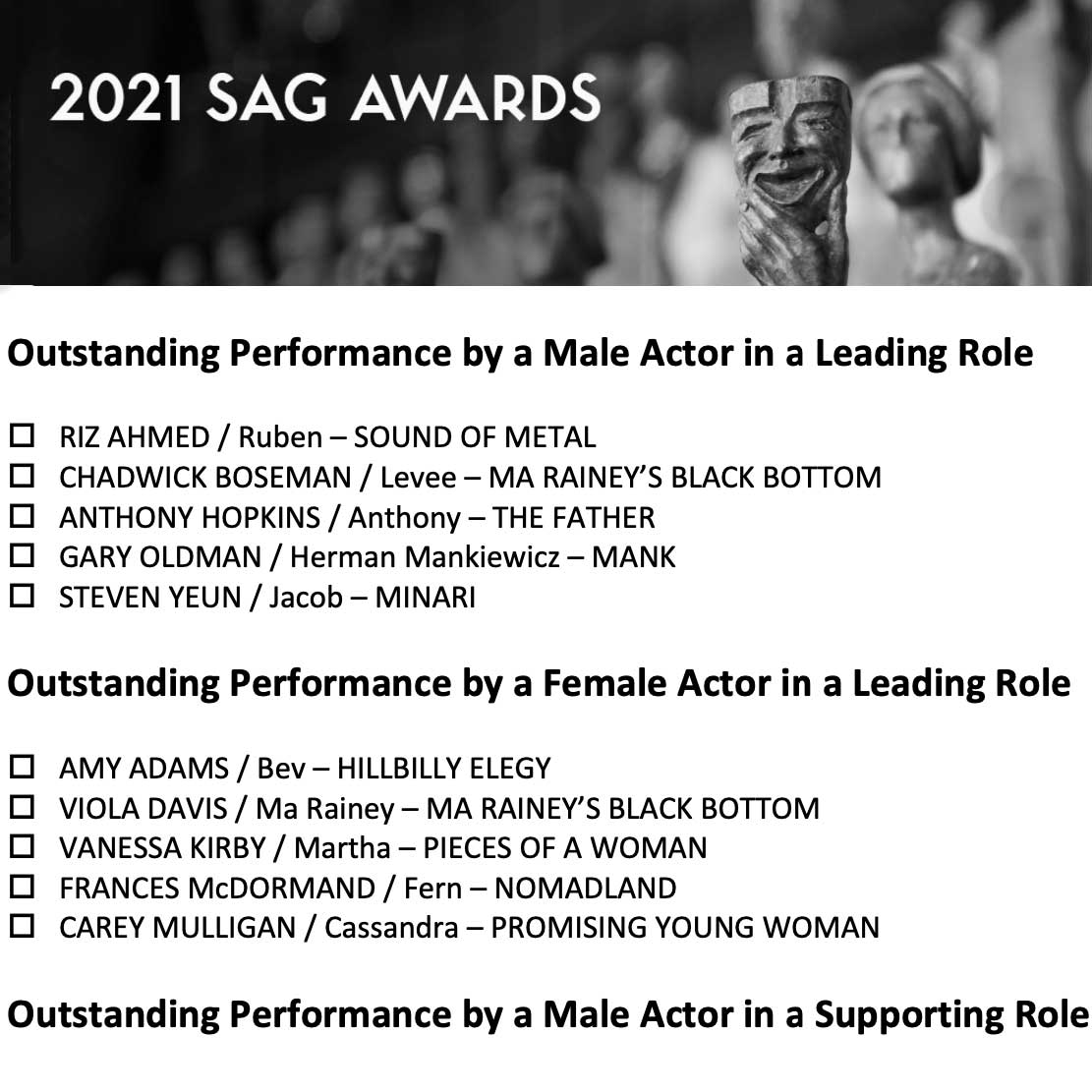 I don’t know about you, but after a year of coronavirus lockdown I can use as many virtual parties as I can find. I’ll be pouring some bubbly, tuning in, and playing along. Join me. Here’s your printable ballot in pdf format.

CAN’T WAIT FOR THE SHOW?
Here’s what you can do right now!

Here’s some interesting background from SAG-AFTRA on THE ACTOR®, the academy’s award statuette:

He’s not yet dressed as he holds the masks of comedy and tragedy, contemplating which persona he will assume when he steps in front of the camera. He’s 16 inches tall and notably heavy. A coveted work of art in his own right, the excellence he represents means most actors would give their eyeteeth to take all 12 pounds of him home.

IN THE BEGINNING: Twenty-five years ago, The Actor® was sculpted by Edward Saenz and designed by Jim Heimann and Jim Barnett. Since then, it has been the task of the American Fine Arts Foundry in Burbank to create the celebrated statuettes for the Screen Actors Guild Awards®.

Under the supervision of Brett Barney and Angel Meza, a team of ten craftspeople labor over a period of three to four months each year to produce the distinctive awards that have become so instantly identifiable with the show.

HOW THE ACTOR® IS MADE: The lost-wax process is an exacting one. The artists start with a mother mold, which is made of silicon. From this mold, they then create the wax. Unfortunately for The Actor, he doesn’t begin his journey into the world with any arms. To create his famously reflective pose, the arms are attached separately since in this complicated process the arms might break off when the wax is pulled from the mold. When fully configured in wax, the statuette still weighs 10 times less than it will in bronze, not including the base, which approximately doubles the weight.

The wax figurine has to be flawless in order to maintain the integrity of the final product. From there, the wax gets treated with ceramic material to create a casting mold that’s going to hold the molten bronze inside. When the metal gets inside the ceramic mold, it is left to solidify for a few hours.

Once the metal sets, the mold is broken. That allows the foundry craftspeople to develop the image. The process involves sandblasting, tooling, grinding, polishing and metal chasing. The distinctive blue-green patina is achieved through chemical oxidation, a natural process that can be sped up with a blowtorch.

After the base is added, which has a diameter of 4 inches and a circumference of 13 inches, and a final quality control check is complete, each statuette gets a stamp with a unique serial number.

NOBODY KNOWS HOW MANY STATUES WILL BE AWARDED: The SAG Awards will not know how many Actor statuettes it will hand out until the awards presenters open the envelopes on Sun., Jan. 27, 2019. Though the number of categories and special awards is known ahead of time, there is no way to predict how many actors will be honored as part of the Outstanding Performance by a Cast in a Motion Picture,

To date, the Foundry has produced over 1,000 Actor statuettes, each nearly identical and yet each an individual work of art. The first statuette cast is on display at SAG-AFTRA headquarters in Los Angeles.

THE STATUETTE HAS A BIG BROTHER: Five 10-foot, 200-pound likenesses of The Actor statuette were introduced at the 9th Annual Screen Actors Guild Awards. Augmented by two newer likenesses, oversized Actors will once again will grace the red carpet, the stage, the media rooms and the Post- Awards Gala at the 25th Annual Screen Actors Guild Awards. Scenario Design in Los Angeles constructed the first five painted fiberglass statues under the supervision of Scenario Design President Paul Buckley and Scenic and Sculpting Department Head Daniel Lucas, while the sixth and seventh were constructed by California Art Products Co. under the direction of Andre Adidge.