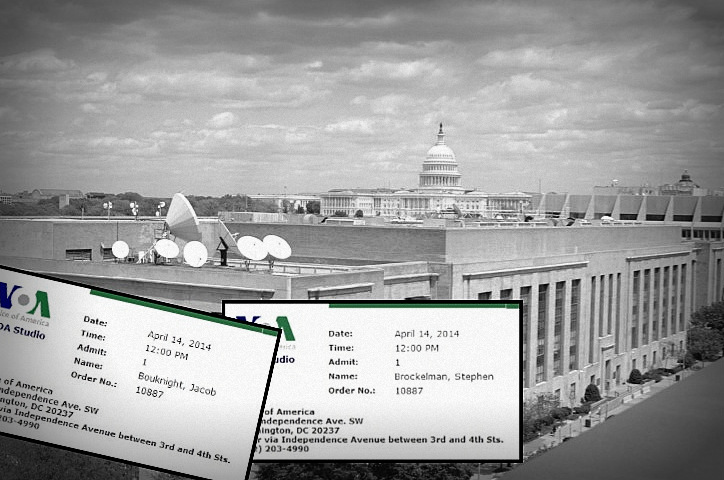 Our family had a shortwave radio and the VOA’s English broadcast was one of the strongest signals on the dial. On either side of the VOA frequency that we listened to from time-to-time, were Morse Code broadcasts of the same material. Somehow, in the midst of the Cold War, Sputnik, and a Presidential assassination, it seemed important to learn every form of communication available. I used those adjacent VOA broadcasts as practice channels when I began to learn the ‘dit-dit-dah dit-dah’ of the Morse telegraph language.

Monday Jacob and I, with official passes in hand, will be at 330 Independence Avenue, 20237, to visit the largest United States international broadcast operation. The headquarters of VOA is also the home to some great murals from the era of the Works Projects Administration.

The Wealth of the Nation, Seymour Fogel

About VOA: The Voice of America (VOA), a dynamic multimedia broadcaster funded by the U.S. Government, broadcasts accurate, balanced, and comprehensive news and information to an international audience.

It started in 1942 as a radio news service for people living in closed and war-torn societies. It has grown into a multimedia broadcast service. VOA now reaches people on mobile devices and Facebook, through Twitter feeds and call-in programs – using the medium that works best for specific audiences.

VOA’s work in all languages and platforms is governed by the VOA Charter, signed into law by President Gerald Ford in 1976. The Charter states, in part, that “VOA will serve as a consistently reliable and authoritative source of news. VOA news will be accurate, objective, and comprehensive.” That is why we feature those words on the VOANews.com banner.

The Charter also states that “VOA will present the policies of the United States clearly and effectively, and will also present responsible discussions and opinions on these policies.” VOA’s journalists also rely on our Journalistic Code, which lays out the standards for reporting accurate, objective, and comprehensive news. The Code establishes VOA’s principles and practices for “sourcing” stories, and ensuring accuracy, balance, fairness, context, and comprehensiveness. All journalistic organizations conform to similar standards.

One thought on “To DC for a few days; not just for blossoms”