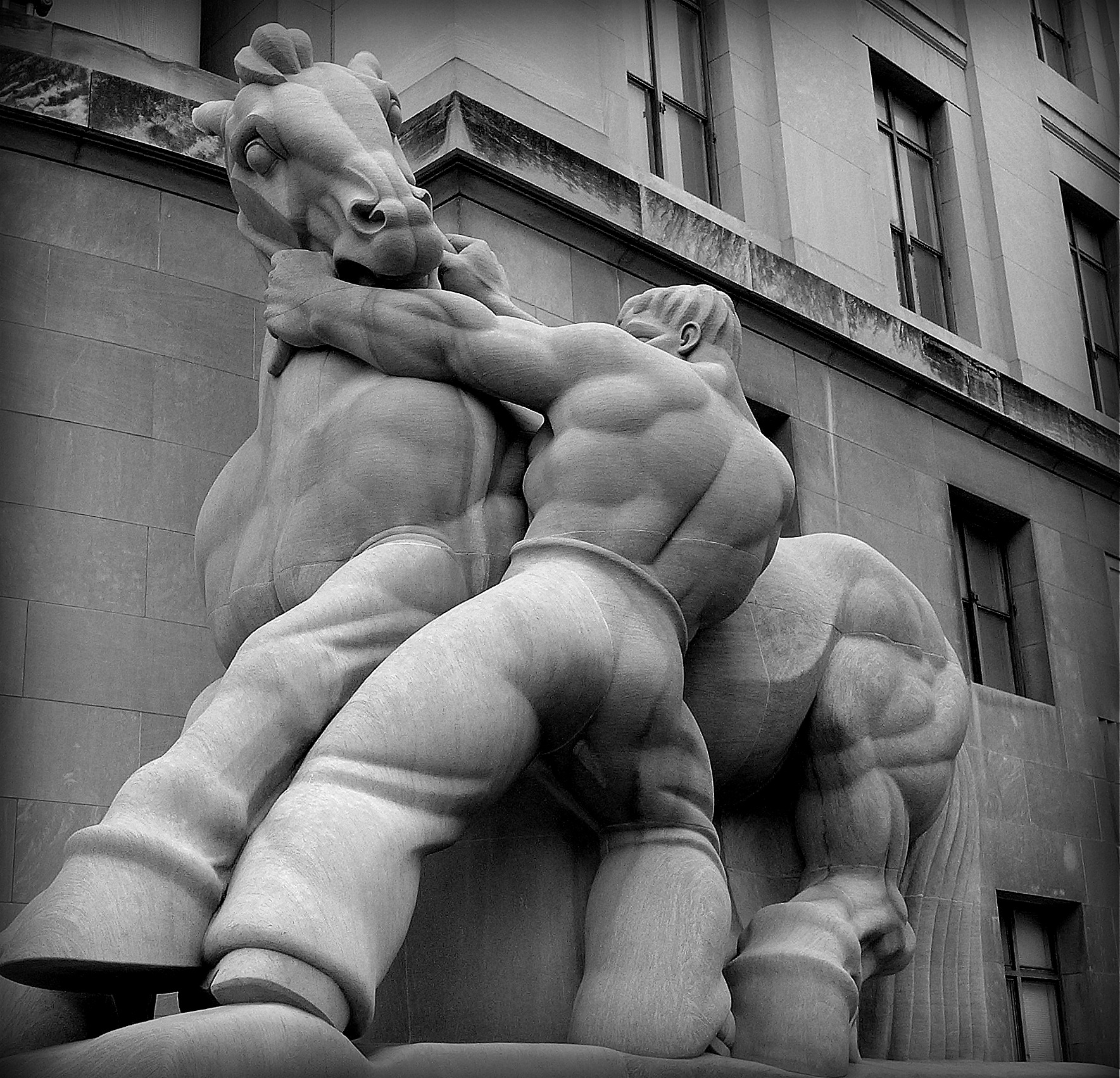 Their creators were brothers Michael (1908–1988) and Walter Lantz (1899–1994). The National Sculpture Society awards the Walter and Michael Lantz Prize each year.

The sculpture—In 1938, Michael Lantz—from New Rochelle, New York—won the competition to design two sculptures for the Apex Building, home of the Federal Trade Commission in Washington, D.C. The widely publicized “Apex Competition” was the largest American sculpture competition ever held, receiving almost five hundred models from more than two hundred artists. Lantz submitted small models of his designs, each showing a heroic figure straining to control a powerful horse representing trade. The final, seventeen-foot-long statues were completed in 1942 and installed outside the eastern entrance of the Federal Trade Commission building. The Man Controlling Trade sculptures continue to reside there.

The Artist—From Michael Lantz’s obituary in the New York Times:

Michael Lantz, a sculptor who made dozens of monumental, figurative, and memorial sculptures for Government buildings, churches, and other sites around the United States, died of a stroke Monday at Lawrence and Memorial Hospital in New London, Conn. He was 80 years old and lived in Old Saybrook, Conn.

Mr. Lantz, whose older brother, Walter Lantz, was a film animator and created the Woody Woodpecker cartoon, studied at the National Academy of Design and the Beaux Arts Institute in New York.

In 1938, at age 29, he won a $45,600 commission for two monumental stone sculptures. Entitled ”Man Restraining Trade,” each depicting a burly figure reining in a bucking horse, they still stand at the Federal Trade Commission building in Washington.

Among his other major commissions is the 28-foot-high sculpture of St. Avold at the Lorraine American Cemetery and Memorial near St. Avold, France, which is the largest cemetery in Europe for American soldiers killed in World War II. Mr. Lantz also frequently designed commemorative and historical medals and seals.

The FTC—When the FTC was created in 1914, its purpose was to prevent unfair methods of competition in commerce as part of the battle to “bust the trusts.” Over the years, Congress passed additional laws giving the agency greater authority to police anti-competitive practices. In 1938, Congress passed a broad prohibition against “unfair and deceptive acts or practices.” Since then, the Commission also has been directed to administer a wide variety of other consumer protection laws, including the Telemarketing Sales Rule, the Pay-Per-Call Rule, and the Equal Credit Opportunity Act. In 1975, Congress gave the FTC the authority to adopt industry-wide trade regulation rules.

We all know cartoonist Walter Lantz.