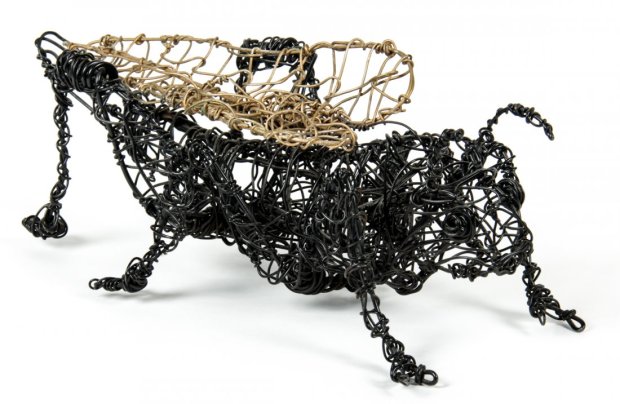 Throughout the 1960s, Dude’s alarm clock rang at 4:00 a.m.—Saturdays, Sundays, holidays included. An hour or so later he was unpacking tins of shoe polish—black, brown, cordovan, and neutral—along with his well-used brushes, buffers, and rags. He kept the tools of his trade in a decades-old wooden box that he carried under his left arm. The strap of the box had, over the years, worn a deep groove in his left shoulder. In his right hand, he carried a large, brown, corrugated cardboard box. It had a lid. He had glued a leather strap around the box so that he could carry it as if it were a suitcase.

Those early mornings, Columbus “Dude” McGriff would walk to one of the Manhattan hotels where he, from time-to-time, leased a shoe shine stand. Dude was nearly blind in one eye; his second eye was glass. He waxed and polished the shoes of swells, business-men, and visitors who wanted to look their New York City best.

After he’d organized his tools-of-the-trade, Dude would open the other box—the one that he carried in his right hand—and extract three or four of his creations from their protective newspaper wrapping. One day he might display an airplane, a truck, and a grasshopper—another day, maybe a cow, a bus, and an ant. 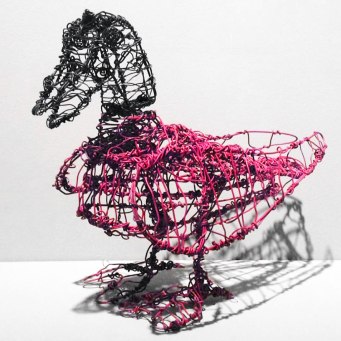 Columbus “Dude” Mcgriff at the Ogden Museum of Art

In the 1960s, Mel Torme bought some of Dude’s creations, as did Robert Goulet. More than two decades later film director, Jonathan Demme would seek out Dude who was living in Tallahassee, Florida and buy some of the man’s work.

Today, Columbus “Dude” McGriff’s work is in the permanent collection of the Ogden Museum of Southern Art and examples were included, posthumously, in a 1993 exhibit that opened in Tallahassee and was curated by James Roche, a 40-year art professor at Florida State University. His wire sculpture was featured in Missing Pieces: Georgia folk art, 1770-1976, curated by the Atlanta Historical Society, the Telfair Academy of Arts and Sciences, and Columbus (Georgia) Museum of Arts.

The following narrative is a compilation of found interview and video transcripts featuring Roche talking about the Unsigned, Unsung show, self-taught and outsider art, and Columbus “Dude” McGriff. Not all are complete.

Professor Roche, 1993—Columbus “Dude” McGriff, recently deceased, unsigned, unsung, nobody knew him for years; he’s what we call the Lost Wireman–you’ve heard of the Philadelphia Wireman—well, Columbus was ‘the Lost Wireman.’

He was in some shows in ’76, that was before that people had seen the [McGriff’s] work in NYC. Columbus—he was almost blind in one eye and the other one was glass—worked in hotels there as a shoeshine man.

When we started this show, Columbus was in perfect health. He was born dirt-poor, near a large plantation, dependent on that for work. Many families are not unhappy about that way of life, and Columbus was that way. Came from a family in Gadsden County, Florida, but right off from the beginning, they were working in the fields; he would go off, play with the other guys, but when he was five years old, his eye was punctured with a piece of wire.

He cut his other eye, too, later on, but first he started with one good eye, and he had these huge hands and you can tell his work because of the tightness of the wire, then he had a few shows, nobody much heard of him, but he stayed in Cairo, Georgia, until his death very recently, the last day of last year…he was supposed to leave the hospital, but died that night.

Like I said, blind completely in one eye and punctured in the other eye, he just couldn’t see so he would go around picking up scrap pieces of wire from the baling machine so that people wouldn’t step on it with their feet, that was his job. How’d he find the wire? He’d step on it,: pick it up, to keep people from steppin’ on it. But at the end of the day he’d come back with the wire and start building stuff, and he really built with wire all of his life.

Columbus started making toys. He made little cars and airplanes and trucks, he made them his whole life. He died at sixty years of age. To me, he is the best wire bender that we’ve seen. No one bends wires the way Columbus McGriff did. And I’ll tell you why. He was known in Cairo Georgia as “Dude” McGriff. But I also came to find out that he was known to some as “Mr. Grip.” Now, what does “Mr. Grip” mean? “Mr. Grip” means that Columbus had seriously strong hands and could take this steel bailing wire (like you and I could take a piece of kite string and wrap it around our finger), and curl it and pull it and curl it and pull it—anyway he wanted to. Mostly, because his hands were twice the size around as mine.

It’s easy for me to spot a piece by Columbus McGriff because no one wound wire as tightly as he did. All steel. He’s dead, he’s gone, but what a wonderful legend: toys, animals, and the joy that he gave to children. I never saw a child that wouldn’t immediately love and want to come over and pick up a Columbus McGriff toy or sculpture. I call them toys because they were childlike, he was like a child.

A lot of these guys go quickly, know what I mean? In bad health, bad situations. Columbus choked to death, no excuse at all. He was in a little, southern hospital.

February 2014—
We received an invitation from Material Culture Gallery in Philadelphia:

We will hold a weekend of auctions dedicated solely to the superb self-taught art collection of Oscar-winning director Jonathan Demme. In an exclusive arrangement with the auction house, Demme brings a multitude of painting and sculpture to the sales, totaling over 1000 lots. Direct from the Eye: The Jonathan Demme Collection of Self-Taught Art is a compendium of Demme’s travels and tastes that transcend borders, encompassing Haitian and American self-taught artists from the 1940s to the present, contemporary intuitive painters from Jamaica, as well as art from Africa, South America, and Europe. Jonathan Demme’s impressive collection will also be on display in a pre-auction show.

Join us for a special exhibition party honoring Mr. Demme and his 70th birthday will be held on Friday, March 28, from 7 PM to 11 PM, with refreshments and live music by Jamaican-born American Reggae recording artist and actress, Sister Carol East.

We’re enjoying it, learning its secrets, having a display case made, and sharing the story of Columbus “Dude” McGriff. We recently acquired a 40-year old copy of Missing Pieces: Georgia folk art, 1770-1976—our grasshopper is featured in it.

6 thoughts on “Dude, the Lost Wireman”