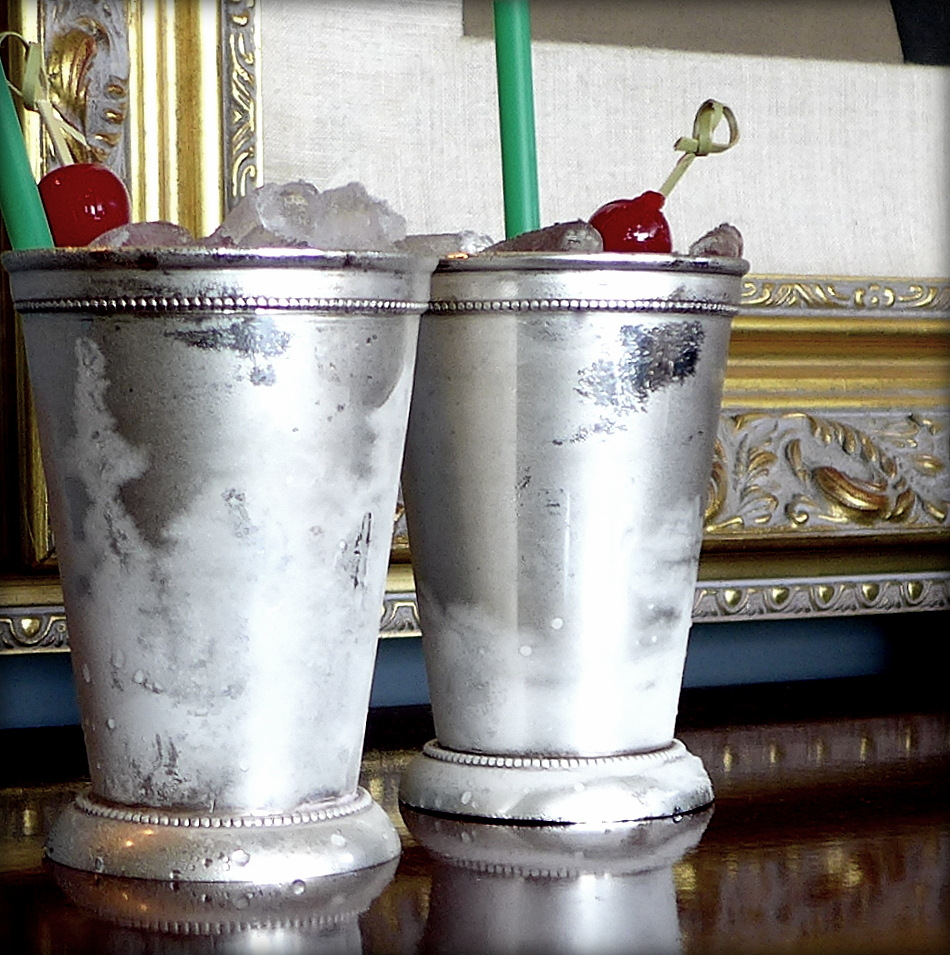 When The New York Times wrote about it in 2005, Jacob and I discovered the best drink for Belmont Park’s signature race—we’ve been a fan of the cocktail called the Tremendous Machine ever since.

This a cocktail named for Belmont’s most prestigious champion, Secretariat. As that great horse came barreling around the stretch turn at the 1973 Belmont Stakes, which he won by a stunning 31 lengths, he inspired in Chick Anderson, the track announcer, an exultation of impromptu poetry that rivaled the radio reporter Herbert Morrison’s description of the Hindenburg disaster in 1937 and Russ Hodges’s enthusiasm for the Giants’ winning the pennant in 1951:

“Secretariat is widening now. He’s moving like a tremendous machine!”

From Julie Powell via the NYT:

Although Belmont Park lies just outside the city limits, it is quintessentially New York. And as the newest of the homes of the three legs of the Triple Crown, it has managed to remain the least fraught with grand tradition. At Churchill Downs, in Louisville, you can be pretty sure of what’s being served in those mint-bedecked silver cups, and at Pimlico, in Baltimore, you know you will eat Maryland crab cakes and quaff black-eyed Susans.

Belmont’s few rituals do not loom so large and mint julepy. The only food associated with the track is Manhattan clam chowder, a dish peculiarly unsuited to either summertime or railside eating. And few people have heard of either of the drinks associated with the Belmont: the white carnation, a concoction calling for a splash of cream, which has an unpleasant tendency to curdle when added to the vodka, orange juice and peach schnapps; and the Belmont breeze, a fruity, sherry-laced drink invented in 1998 by Dale DeGroff, then head bartender at the Rainbow Room.

Powell and her friends made Tremendous Machine’s for their 2005 visit to Belmont and they say, “The Belmont breeze, which tastes like a refined trashcan punch, represents a significant improvement over the nigh undrinkable white carnation, neither has much hope of achieving the status of the mint julep, their Kentucky Derby sister. The TM beats them all.

“We’re happy to put our invention, the Tremendous Machine, head to head with Belmont’s traditional cocktails. It’s strong enough to honor its namesake, simple and clean with a touch of Manhattan urbanity. A splash of Grand Marnier lends a hint of the sweet citrus flavor of the Belmont breeze and the erstwhile white carnation, while the pairing of bourbon and fragrant rosemary links it to the demure Southern julep.”

Here’s the formula for the Tremendous Machine; it’s much better than any of the various ‘Official Drinks’ of the Belmont Stakes:

Fill a shaker with ice and add bourbon, vermouth, Grand Mariner, rosemary and Angostura bitters. Shake until well chilled. Strain into martini glasses or into julep cups filled with crushed ice. Garnish with a cherry on a rosemary sprig.

The Tremendous Machine has become our go-to cocktail for not only the Belmont Stakes, but for the Kentucky Derby, and the Preakness. For us Try it, you’ll never sip a drink and see a horse race the same way again. But, please don’t try to omit the fresh rosemary; it won’t work if you do.

UPDATE: The official Belmont drink for 2017 is the Belmont Jewel and it sounds like it was created for mass production. Basically bourbon and lemonade with a hit of pomegranate juice. No thanks.