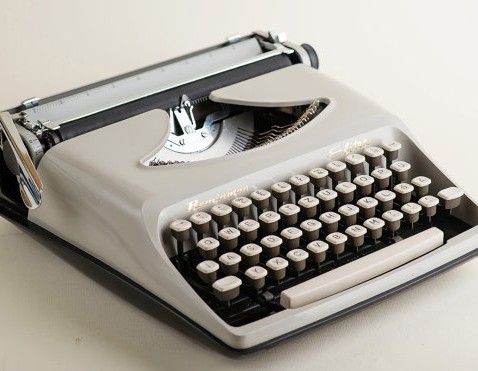 ‪#‎TBT‬ When I started high school, I asked my grandmother for a typewriter for Christmas. (I’d already tapped my parents pretty heavily that year.) She said, “Sure, honey, but I wouldn’t know what in the world to buy.”

Anticipating her response, I just happened to have picked out the one I wanted and had an ad for it in my pocket. She asked me why I wanted that particular one because, she said, “It’s nice looking, but you might want something larger, more substantial.”

Christmas arrived, and my new Remington Streamliner was under the tree. I never did tell her why I picked out that particular one, but I’ll share the reason with you: It was the exact model that Dick Van Dyke as Rob Petrie used on The Dick Van Dyke Show when he was working from home at 148 Bonnie Meadow Road, New Rochelle, New York.

Sally Rogers at the Remington Streamliner

My Streamliner moved to New York with me in 1969, and I used it for nearly a decade.

Still—all of these many, many years later—I’ll sometimes hear the ping of a bell with a certain pitch and feel, in response, as if I need to push my Remington’s sleek, chrome carriage return to the right and start a new line.

One thought on “My first typewriter was a Streamliner.”