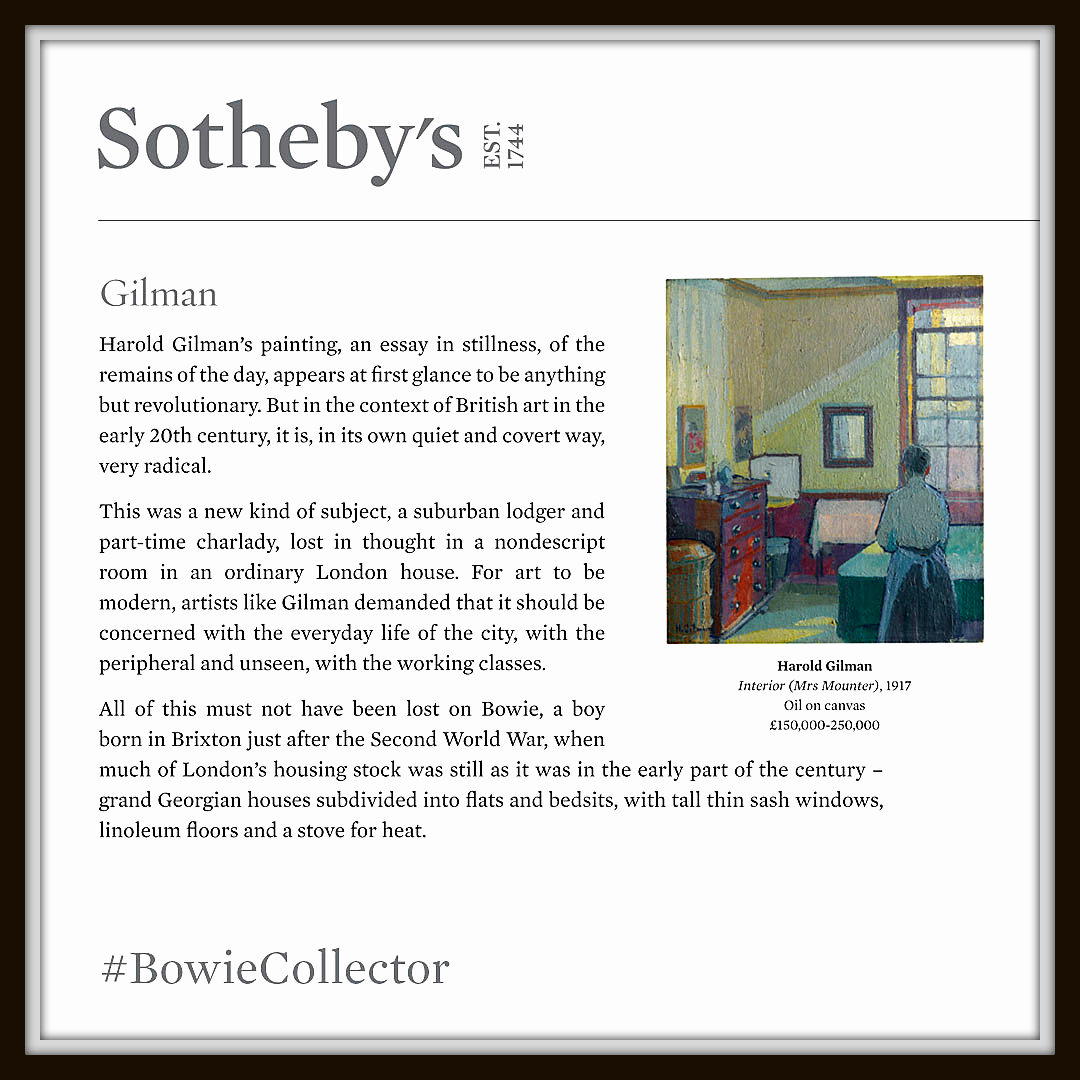 Important Paintings by 20th-Century Masters including Basquiat, Hirst and Auerbach to Lead a Major 10-Day Exhibition and Auction at Sotheby’s in London

Musician, actor, icon—David Bowie was for almost 50 years one of the most recognised and revered artists in the world, his influence transcending music to shape the wider culture of our time. His life as an art collector, however, was something he kept almost entirely hidden from public view. Now, for the first time, this little-known side of Bowie will be fully revealed.

In November this year, Sotheby’s will stage Bowie/Collector – a three-part sale that includes a selection of around 400 items from the private collection of David Bowie.

At its heart will be Bowie’s collection of Modern and Contemporary British art—a richly stimulating group of over 200 works by many of the most important British artists of the 20th century, including Henry Moore, Graham Sutherland, Frank Auerbach and Damien Hirst. Bowie’s famously inquisitive mind also led him to Outsider Art, Surrealism, Contemporary African art and, not least, to the work of the eccentric Italian designer Ettore Sottsass and the Memphis group.

This is a collection put together with great thoughtfulness on the basis not of reputation but of Bowie’s highly personal, intellectual response to each artist’s individual vision.

From 1–10 November, Bowie’s private collection will be exhibited at Sotheby’s New Bond Street galleries in London, giving fans, art historians and collectors a once-in-a-lifetime opportunity to immerse themselves in the art and objects that informed his private world.

world, starting with a three-week exhibition of selected works in London this summer, from 20 July until 9 August. Further exhibitions will follow in Los Angeles, New York and Hong Kong. The sale catalogue will be available in early October.

Register for a copy here: sothebys.com/BowieCollector

A spokesperson for the Estate of David Bowie said:
“David’s art collection was fuelled by personal interest and compiled out of passion. He always sought and encouraged loans from the collection and enjoyed sharing the works in his custody. Though his family are keeping certain pieces of particular personal significance, it is now time to give others the opportunity to appreciate – and acquire – the art and objects he so admired.”

“Art was, seriously, the only thing I’d ever wanted to own. It has always been for me a stable nourishment. I use it. It can change the way I feel in the mornings. The same work can change me in different ways, depending on what I’m going through.” – DAVID BOWIE quoted in The New York Times, 1998

The depth of Bowie’s engagement with the art world cannot be overemphasised. He was an artist, critic, patron, publisher, curator and magazine editor, with London – and Modern British art – at the heart of this passion. In 1994 – in a characteristically unorthodox move for a rock superstar – he joined an invitation only academic coterie on the editorial board of Modern Painters magazine, for which he interviewed the likes of Jeff Koons, Damien Hirst and Tracey Emin. In 1998, he launched the art-book publishing company 21 alongside Karen Wright, then editor of Modern Painters, the gallerist Bernard Jacobson and Sir Timothy Sainsbury.

His time at 21 is best remembered for perhaps the most infamous hoax in recent art history, when Bowie hosted an elaborate party at Jeff Koons’ Manhattan studio for the launch of a book celebrating the life and work of a mysterious artist named Nat Tate, a wholly fictional creation of his friend, the novelist William Boyd.Bowie painted throughout his life and was immersed in the artistic communities not only of London, but also of New York and Berlin.

He first met Andy Warhol at the legendary ‘Factory’ studio in New York in 1971; and was critically acclaimed for his portrayal of the American Pop pioneer in Julian Schnabel’s 1996 biopic, Basquiat.

The Collection in Focus

Simon Hucker, Senior Specialist in Modern & Post-War British Art at Sotheby’s, said: “As a collector, Bowie looked for artists with whom he felt some connection, and for works that had the power to move or inspire him. This is what led him to British art of the early and mid-20th century in particular, which, of course, also led him home.”
Born and raised in South London, it is perhaps no surprise that Bowie was drawn to chroniclers of the capital’s streets such as Harold Gilman, Frank Auerbach and Leon Kossoff, whose tutor and inspiration, David Bomberg, Bowie also collected in depth. Away from the city, the British landscape was also a constant source of fascination for Bowie, represented here by the St Ives school and later post-war and contemporary painters such as Ivon Hitchens and John Virtue.

Bowie’s collecting was by no means limited to British art: from early century pioneers such as Marcel Duchamp to Jean-Michel Basquiat (represented in the summer London preview by his 1984 masterpiece Air Power), to Contemporary African art and ‘Outsider’ artists

from the Gugging Institute in Vienna, the collection is truly breathtaking in its scope, encompassing paintings, drawings, sculpture, prints and photographs.

Set to be unveiled in its entirety in the coming weeks and months, it reveals a collector of far-reaching interests, intellectual rigour and subtle vision.Bowie was also a voracious collector of the work of Ettore Sottsass and his revolutionary Memphis Design group.

Cécile Verdier, Co-Head of 20th Century Design at Sotheby’s, said:
“The works produced by the historical avant-garde design collaborative Memphis Milano, led by Ettore Sottsass, could not have found a more receptive and tuned-in audience than David Bowie.This is design with no limits and no boundaries. When you look at a piece of Memphis design, you see their unconventionality, the kaleidoscope of forms and patterns; the vibrant contrasting colours that really shouldn’t work but really do.”

Further information on all aspects of the collection will be made available in the coming weeks.