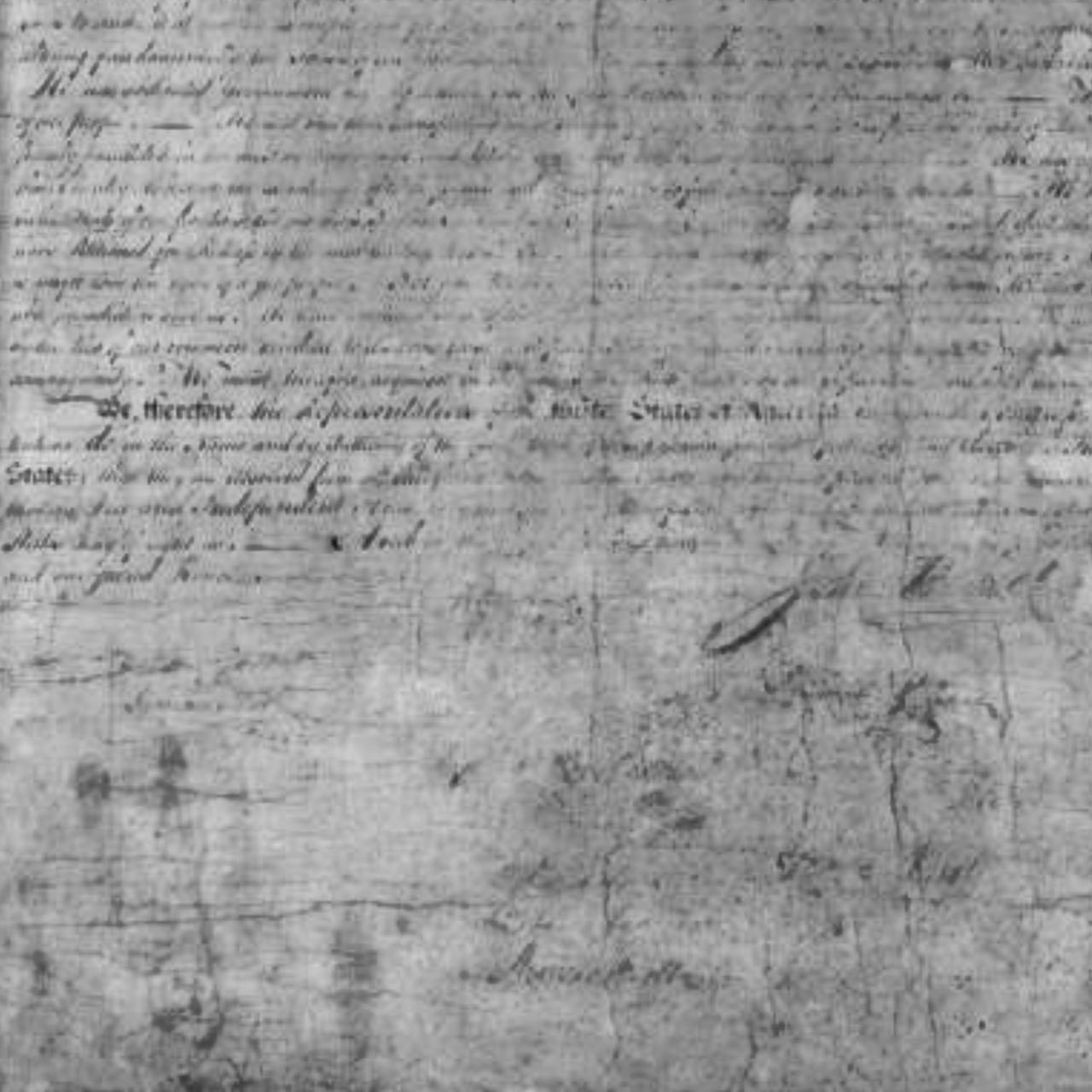 The movie, National Treasure is a favorite of mine. It’s a fun romp, a historical-fantasy-mystery, and the Declaration of Independence is a key player—I’ve always been fascinated by the documents that helped establish the founding of our country—I was overjoyed when my former employer and friend, Norman Lear, bought the 23rd known copy of the Dunlap Broadsides and put it on tour across America for all of us to see. The copy Lear purchased for $8.4 million in 2000 was produced by John Dunlap, a Philadelphia printer, the night of July 4, 1776.

Our “official” Declaration of Independence—the one we consider the full, signed original or the Matlack Declaration—is in rough shape. Consider this:

Mary Lynn Ritzenthaler and Catherine Nicholson wrote a highly informative article about the state of the Declaration in Prologue Magazine, a publication of the
NationalArchives titled The Declaration of Independence and the Hand of Time.

Ritzenthaler and Nicholson commented that, “The Declaration continues to instill a sense of awe. But the physical document itself has suffered greatly over the years. Its legibility is greatly diminished, and the document today is much different in appearance from when it was penned in 1776. Compared to the legibility of the U.S. Constitution (1787) and Bill of Rights (1791), which are only slightly more recent, the differences are startling.

“So what happened to this revered document?

“There is little written evidence of what may have happened—or when—to alter the document. However, by piecing together the history and travels of the Declaration, and by examining key photographs, we can answer some questions about how the document got to its current state.”

In an interview with the Washington Post, Ritzenthaler said, “The defining damage that made the Declaration what it is today was not the result of 19th-century copying or excessive exhibition, but occurred in the 20th century. Something happened after 1903 that caused that damage, and made people . . . enhance the signatures.”

The Declaration that is the subject of deterioration and concern—the one we know as the “original”—is the copy signed by Congress and known as the engrossed or parchment copy. This copy was probably handwritten by clerk Timothy Matlack, and given the title of The unanimous declaration of the thirteen United States of America. This was specified by the Congressional resolution passed on July 19th, 1776:

“Resolved, That the Declaration passed on the 4th, be fairly engrossed on parchment, with the title and stile of The unanimous declaration of the thirteen United States of America, and that the same, when engrossed, be signed by every member of Congress.” (Boyd, Papers of Jefferson, 1:315) and “United States” (ibid., 1:427)

We may never know who defaced the document with their handprint, or who overwrote some of the text, or who embellished the signatures—but I think there’s a swell movie in this mystery just waiting to be written…