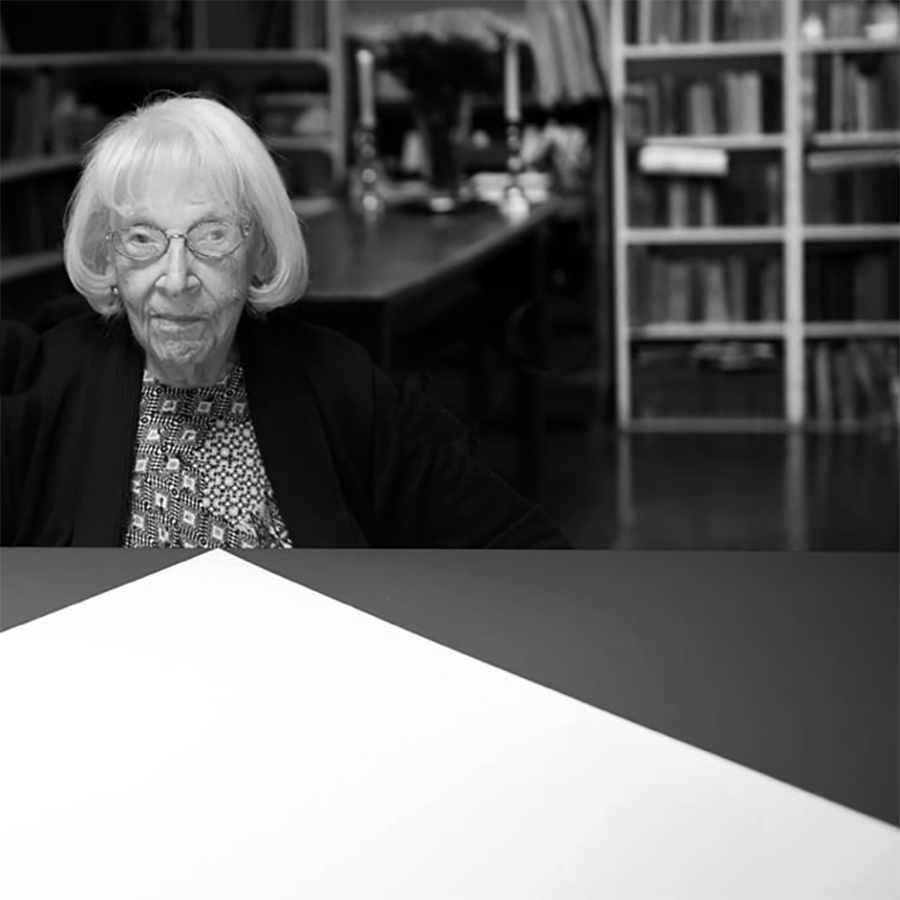 At age 104. Carmen Herrera says, “I waited for my bus for 94 years.” She’s referring to the saying, “if you wait long enough, your bus will come.” Her bus was the British Gallery Ikon in Birmingham which presented the first exhibition of her work. From from that premiere show—at age 94—her stature in the art world has been on a meteoric rise.

The calculated, vibrant, application of paint.
Carmen Herrera’s drive for organized simplicity and a powerful, arresting sense of color are central to her paintings. “My quest,” she said in 2012, “is for the simplest of pictorial resolutions.” Herrara is a master of crisp lines and contrasting chromatic planes, She creates symmetry, asymmetry, and an infinite variety of movement, rhythm, and spatial tension across her canvas by laying down unobtrusive layers on of paint.

On May 31, 1915, Carmen Herrera was born in Cuba. She was educated in Havana and Paris. She studied art, art history, and architecture and—over her life—all three subjects continue to inform her canvases and sculptures.

Just two colors.
In Paris, in 1939 she met and married Jesse Loewenthal, an American. They moved to New York City, where she attended classes at the Art Students League on West 57th Street and was a frequent visitor to the Whitney Museum of American Art. From 1948 to 1953, Herrera and Loewenthal returned to Paris, where she associated with the Salon des Réalités Nouvelles. Herrera regularly exhibited her work with the Salon and honed her distilled, geometric style of abstraction, reducing her palette to three colors for each composition, then further to two.

Enter the Public Art Fund.
The Public Art Fund brings dynamic contemporary art to a broad audience in New York City and beyond. The fund mounts ambitious, free exhibitions of international scope and impact. They aim to offer the public powerful experiences with art within the urban environment. And, their current exhibition more than meets that aim.

Carmen Herrera: Estructuras Monumentales.
The fund says, “This is the first major exhibition of outdoor sculptures by New York-based artist Carmen Herrera. She has created vibrant, abstract paintings for more than 70 years, but has only recently received her well-deserved recognition. Herrera’s radiant compositions simplify dynamically juxtaposed forms to their purest elements of color and geometry, creating a distinctive and iconic clarity by emphasizing what she sees as the beauty of the straight line.”

For decades, Herrera’s Estructuras series of sculptures were even less well known than her paintings. Informed by her architectural training, Herrera began the series in the 1960s with a group of diagrammatic sketches. She envisioned large-scale monochromatic sculptures that would extend the experience of her paintings into three dimensions. Until recently, these historic proposals have remained unrealized. With Estructuras Monumentales, this remarkable artist is now able to share her powerful structures with public audiences for the first time.