In the spring of 1974, LaRae Petrovich and I ran into each other in the office break room. She asked if I’d seen Marlo Thomas’ ABC TV Special, Free to Be…You and Me. I said that I hadn’t.

“I have the album. Come over. I’ll make drinks and we’ll listen.” 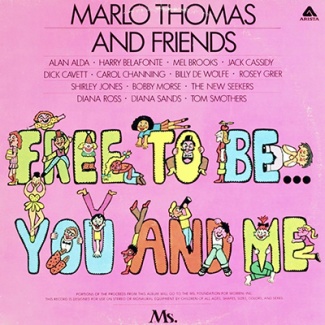 A few days later—on a Friday night—I jumped into my MG and drove from Hollywood to Glendale. LaRae and I made drinks and sat down on her living room floor. She put the record on the turntable, dropped the needle, and I discovered the most remarkable, the most affirmative musical messaging about, diversity, acceptance, recognition, equality, self-worth, and being free to be yourself that I’d ever heard. And the voices! The album’s songs and sketches were brought to life by Marlo Thomas, Mel Brooks, Alan Alda, Dick Cavett, Carol Channing, Rosie Grier, Harry Belafonte, Robert Morse, Dianna Ross, Tom Smothers, Billy de Wolfe, and more.

This is the title song from the show. As a gay man who had grown up in ultra-conservative Kansas, it brought tears to my eyes, and it provided hope.

Here’s a clip from the FreeToBe Foundation. From the original broadcast, it’s called Boy Meets Girl and features Mel Brooks and Marlo Thomas.

It’s a wonderful, joyful, uplifting hour and a half. Enjoy, and feel free to share.

About Stars in the House: In the wake of the coronavirus pandemic and theatres across the world closing their curtains indefinitely, SiriusXM host Seth Rudetsky and  James Wesley have created Stars in the House, a daily live streamed series to support The Actors Fund and its services.