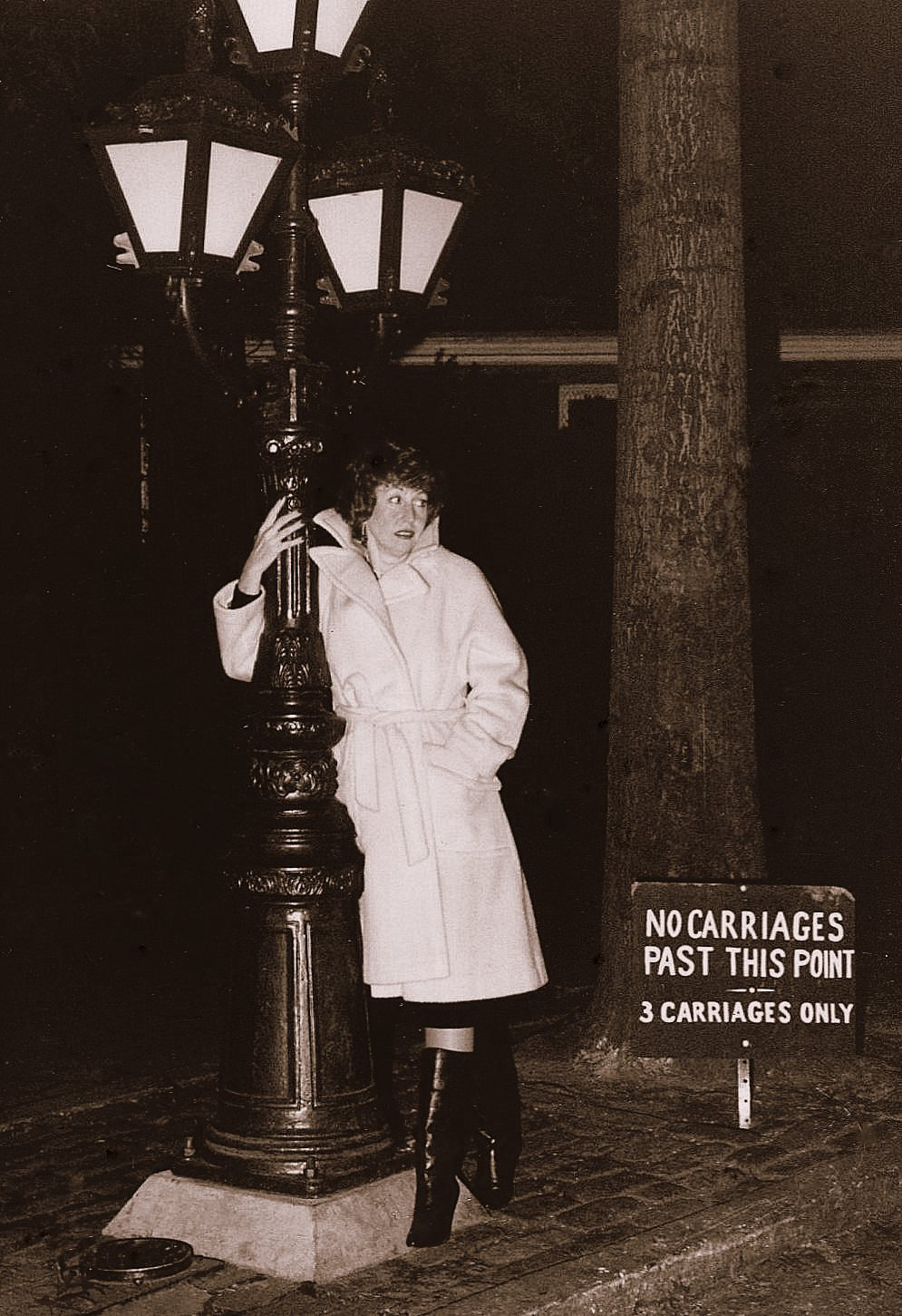 On a beautiful autumn evening in Central Park, the four of us paused to take photos after a grand dinner at Tavern on the Green.

Don Havens and I lived in the Alden on Central Park West. Shirley had flown in from Los Angeles for a short visit with us and one of our clients, Walter Hess, owner of Rose Hill Flower Company on Third Avenue, invited the three of us for dinner. We all tried to dress like swells, but only Shirley actually nailed it.

She looked extraordinary—glamorous—in her tailored white coat over a black-on-black outfit. It made her luxurious red hair look so radiant that the Tavern on the Green’s captain and waiters took notice. They gave her all kinds of attention. Someone sent her a drink. And over dinner, Walter asked her to accompany him to an opera at the Met. They made their date, and then Shirley asked where some Upper West Side “straight bars” were.

Around midnight, after some final photos, Shirley went out on the town on her own, and Don and I went home, as did Walter.

Around 3 AM our phone rang. I answered.

Shirley, “I didn’t want you to worry. I’m having a great time.”
Me, “Where are you?”
Shirley, “I’m on the top floor of the Gulf+Western building. They own Paramount, you know.”
Me, “What?…What?”
Shirley, “A couple of guys wanted to show me the view from Columbus Circle.”
Me, “The view?”
Shirley, “I’ll see you in the morning. Oh, and they have a limousine. I’ll be back in a few hours. Bye.”

True to her word, she strolled in around 5:30 a.m., just as the sun was peaking over the tops of the buildings across the park on Fifth Avenue. For the next few days, she looked a bit smug. Happy, joyful actually, but smug.

Our best girl—the red-haired gal from Waco, Texas—the gal that we’d always thought of as a bit of an innocent, a bit unworldly—was absolutely and entirely in her element in Manhattan. Don and I never, ever underestimated Shirley R. Ray again.

Shirley Ray called me on June 9, 2019, and she sounded as wonderful, clever, and interesting as ever. I never heard from her again. I called several times over the next few months, but her phone wasn’t answered. I sent a letter to her at her Montecito Drive address in Los Angeles. It wasn’t responded to, nor was it returned. I was concerned but didn’t become truly alarmed—Shirley often traveled for extended periods—until my birthday that November when I didn’t receive a call or a card. Shirley had never missed my birthday in the 40+ years I’d known her.

In December 2020, I dug in my heels and did some deep research. Via a Trellis search, I found that Shirley had been put into a conservatorship through an action brought on by two people I’d never heard of: Stephen Cyr and Lisa Jimenez. I wrote the plaintiff’s attorneys, the judge, and Shirley’s conservator, Ellen S Finkelberg. Ms. Finkelberg wrote back to let me know that Shirley Ray was in a “care home” and had “fallen in love with someone there.” I know nothing more.

If you happen to know Shirley R Ray, please contact me. I just want to send her a card, understand what happened to her, and know that she is safe and well.

Her conservatorship is online via Los Angeles County Court and Trellis.