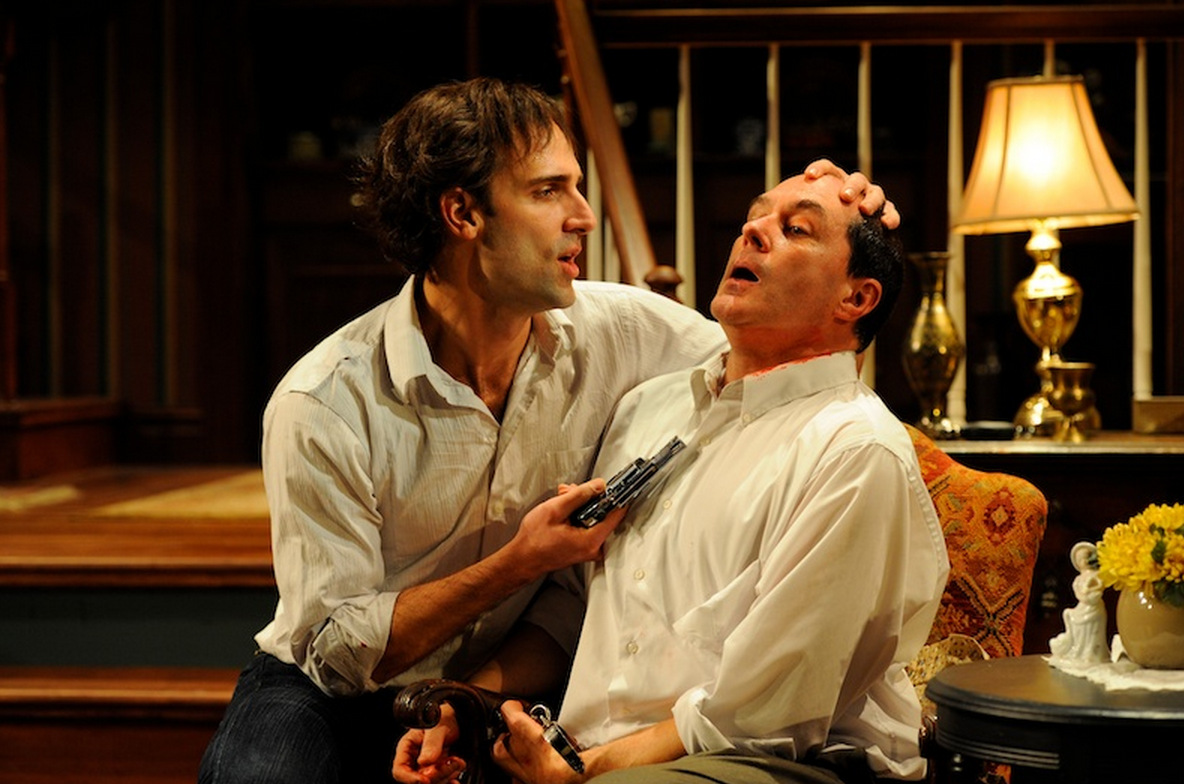 Baltimore has so many wonderful local and regional theatre companies—Spotlighters, CenterStage, Single Carrot, Iron Crow, Vagabond Players, Chesapeake Shakespeare Company, Fells Point Corner Theatre, Strand, Theatre Project, and others—that I find it nearly impossible to call a favorite, but Everyman Theatre’s production choices, in their new West Fayette Street home, seem to speak to me more profoundly, more often, than some of the others. And, Everyman’s resident company is comprised of some extraordinary talents.

On a Sunday afternoon a few weeks ago we met a couple of friends, Dan Klos and Alex, at Everyman for the Baltimore staging of Deathtrap. The production was a treat. And I say that not being new to the show. I’ve read the script several times, I saw the Broadway production at the Music Box Theatre some decades ago and the movie adaptation is a favorite of mine.

The plot of Ira Levin’s script is straightforward, but demands precision timing and absolutely on-mark interaction between the two male leads, some serious stage fighting, and some unusual prop weapons that must work—every single time.

I’ve often wondered if the believability of the action was dependent on the viewer’s proximity to the stage—I’d only seen the show from the mezzanine. In Everyman’s production it wasn’t. We were in the front row. When the garrote was wrapped around Clifford’s neck and yanked tight, he bled. And it was a powerful moment. And I felt it—literally.

After the show I thought about the props and the set dressing and looked online for a props list. Through my search I found a company called Weapons of Choice. They provide theatrical weapons and, since 1990, they have been outfitting over 1,500 productions per year. They also offer an extraordinary book, The Textbook of Theatrical Combat. The book is for you if you’ve ever wondered, “How can I realistically stage a punch to the face”? In the book they also speak to Deathtrap, specifically as a response to an email from a prop master looking for assistance:

There was a time when we provided every single item called for in the props list for [Deathtrap]. Those days are long gone, for a variety of reasons. We still have some items that you might find useful, but first I’d like to cover some ground that we’ve tread before. The following is a verbatim transcript of an e-mail we received from a harried props master. It may sound familiar:

As far as set dressing purposes, the props list calls for a Smith and Wesson 38 long barrel, a German Lugar, 5 small antique pistols and 2 muskets.

For knives, I need a black handled knife and a gold handled dagger, these are “working” props, although obviously I assume that means they fold over or something as to not hurt the actor.

We also need a curved sword and three knives with sheaths for set dressing.

We need 2 crossbows (one as cover) three garrotes, (one a “working” model), and a spring plunger crossbow bolt (whatever that is). Also a screw on crossbow bolt and 3 regular crossbow bolts (one used, two dressing.)

For set dressing, we need a sickle, cleaver, four pair of leg irons, two pair of antique cuffs and a decorated Indian stick with metal rod.”

It was my great joy to let her know that she needed very few of these things.

If you are about to do this play you’ve already been confronted (confounded) with the massive props list in the back of the script (the above e-mail actually referenced only a few of them). Please don’t feel that you have to find all of those items. Remember that that is merely a list in which someone from the original production very carefully notated every item used as either a practical prop or as set dressing. And part of the problem is that whoever that person was didn’t know that the term prop (he calls it “working”) means any portable object other than furniture or costume that is handled by an actor. He incorrectly used the term prop to cover any of the cool toys that were hung on the wall or left on the desk but were not touched. Those items are called set dressing.

No matter the designation, in no way should that be taken as a mandatory list for your show. Most of it can be ignored – just make sure that the walls are covered with a nice assortment of fun and frightening weapons replicas. Even the practical weapons that the technicians of the original show found or built may not be what you need for your production. Remember: your job is not to recreate the Broadway version. Your job is to tell the story in the most efficient manner.

So your list of practical props may include some very dangerous ones as it is, but certainly not everything that was used before. Stripped down to the basics, here is what you truly need:

So, that’s the short list. As for the stuff on the walls, let your imagination go wild, and peruse the other web pages for ideas.

Through Weapons of Choice, I discovered that there’s an important Baltimore connection to professional, on-stage confrontations.

Baltimore Knife and Sword has been the #1 name in stage combat weaponry for several decades. On their website they note that, “Because of the huge demand for our stage combat pieces we often must limit our time for custom work.” BKS takes only a limited number of custom orders each year. Baltimore brothers Matt and Kerry Stagmer often make a handful of one offs for general stock at their dealers around the country. Take a look at what they make: production swords–cutlasses, rapiers, messers and falchions; axes and polearms–trifoils crescents, death axes, adams, and trident poles; the list of their knives, bare blades, and tactical cleavers goes on and on.

I don’t know about you, but I’ll never think about stage combat in quite the same way.