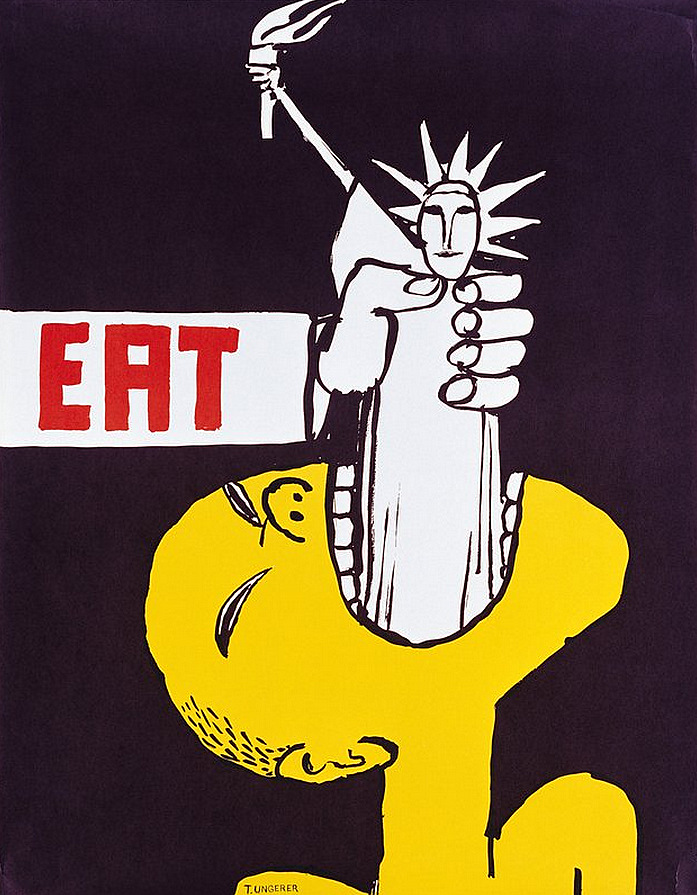 In the 1960s and early 70s artists produced some powerful anti-war images. This remains my favorite.

Illustrator Tomi Ungerer’s best-known radical protest poster, this print was created and printed in 1967 in response to the Vietnam War. Quintessential of the artist’s boldly etched caricature style and acerbic satire, it features a white person’s arm emblazoned with the word “EAT” shoving the Statue of Liberty into the mouth of a yellow man with slanted eyes—a violent visualization of America forcing its ideals on the Vietnamese people.

Tomi Ungerer is best known for his witty children’s books, as well as being a successful political commentator, prolific writer, and erotic artist. Born in Strasbourg in 1931, he first gained notoriety after moving to New York in 1956 and creating illustrations for magazines such as Esquire, Life, Harper’s Bazaar, The Village Voice, and The New York Times. Ungerer is now internationally renowned for his etched caricatures imbued with sharp social satire—a style maintained in his children’s books, which he began to publish with Harper and Row in 1957. These books include such fantastical tales as “The Mellops Go Flying,” (1957) about a family of daring pigs, “The Three Robbers” (1962) a classic French and German story about bandits made honest by an orphan girl, and “Moon Man” (1967) about the man in the moon’s adventure to Earth.

Ungerer’s work has been shown internationally including a retrospective exhibition that traveled from the Louvre to Munich, Düsseldorf, Hamburg, Dublin, and the Royal Festival Hall in London; as well as solo exhibitions at Itabashi Art Museum in Tokyo, Strasbourg’s Museum of Modern Art, and Max Ernst Museum in Brühl, Germany. The Council of Europe chose Tomi Ungerer as their first Ambassador for Childhood and Education and he has been awarded the Hans Christian Andersen Prize for children’s literature. In 2007 a museum dedicated solely to the artist’s work and collections opened in Strasbourg.