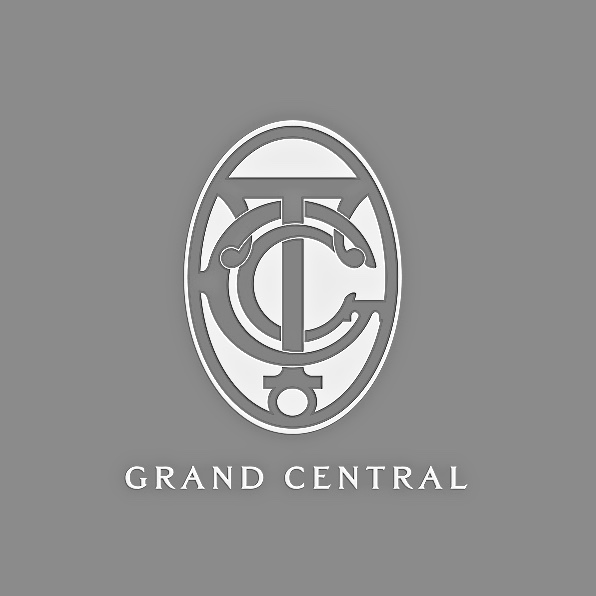 They also introduced a new logo. But first, the news by way of an email that I received this afternoon:

The world’s most iconic transportation destination has a brand-new face on the web. With a design that echoes the beaux-arts beauty of Grand Central itself, the Terminal’s new website features visitor information, a full shopping and dining directory, and all the latest news and events.

A robust history section, produced in collaboration with the New York Transit Museum, tells the remarkable story of Grand Central from Station to Depot to Terminal, and finally to full restoration and landmark status. Gift guides and special offers make shopping a breeze (and a steal!) And both tour and transportation info make planing your visit easy and fun. Give it all a try today!

I’ll save my review on the web design until it’s had a decent breaking-in, shake-down period. Here’s their new logo:

I’m not sure what to make of it. Here’s the official story:

Grand Central Terminal unveiled a new logo today that gives a nod to the building’s history while it embraces its future in the modern world. The new logo features a monogram with all-capital letters “G,” “C,” and “T” in black and gold and the elegant engraver’s font, Sackers Gothic. The public can view the new logo on the Terminal’s newly updated website http://www.grandcentralterminal.com as well as in signage and marketing materials around the landmark building in the coming weeks.

Creative agency the watsons worked with the MTA and Metro-North to develop the new logo. The goal for the designers was to make sense out of more than 100 years of history while moving into the modern era to create one perfect image. For the watsons, that meant looking back at the original architecture to find a mark that has been part of the building since its opening in 1913. The Terminal building features a built-in monogram, a circular marble relief with the letters “G,” “C,” and “T” found repeated in five locations above the ticket windows in the Main Concourse.

“This project has been a design challenge in the best way as we needed to create an image that could stand the test of time for this iconic, timeless building while conveying something fresh and modern to the millions of people who visit Grand Central either in-person or digitally every year,” said Paul Orefice, Creative Director of the watsons. “We believe we have achieved that blend and hope this new logo will be as familiar to everyone who sees it as the building has become to those who pass through it daily.”

Beyond depicting a two-dimensional version of the marble relief, the biggest influences for the new monogram come directly from Grand Central:

The new Grand Central wordmark font, Sackers Gothic, harkens back to an even earlier era. Inspired by engravers fonts popular in the early 20th century, the font’s simple, all-capitals forms reference that period, while the sans serif typeface imbues the logo with modernity. Stylistically, Sackers Gothic serves as a perfect foil to the more detailed font found in the monogram and stone relief.

The logo was last updated for the building’s Centennial in 2013 and celebrated a moment in time. The austere forms of the Sackers Gothic font and mobile-friendly circular design of the monogram enable the new logo to straddle both classic and contemporary worlds, much like the Terminal itself.

“This new logo represents a thoughtful evolution of a classic mark, and introduces a slightly more modern feel that perfectly represents the elegance of Grand Central, as well as the many fun shopping and dining experiences that the Terminal has to offer,” said Joseph Lhota, Chairman of the Metropolitan Transportation Authority.

That’s a thoughtful logo evolution, but if I were having cufflinks made I’d prefer the original.