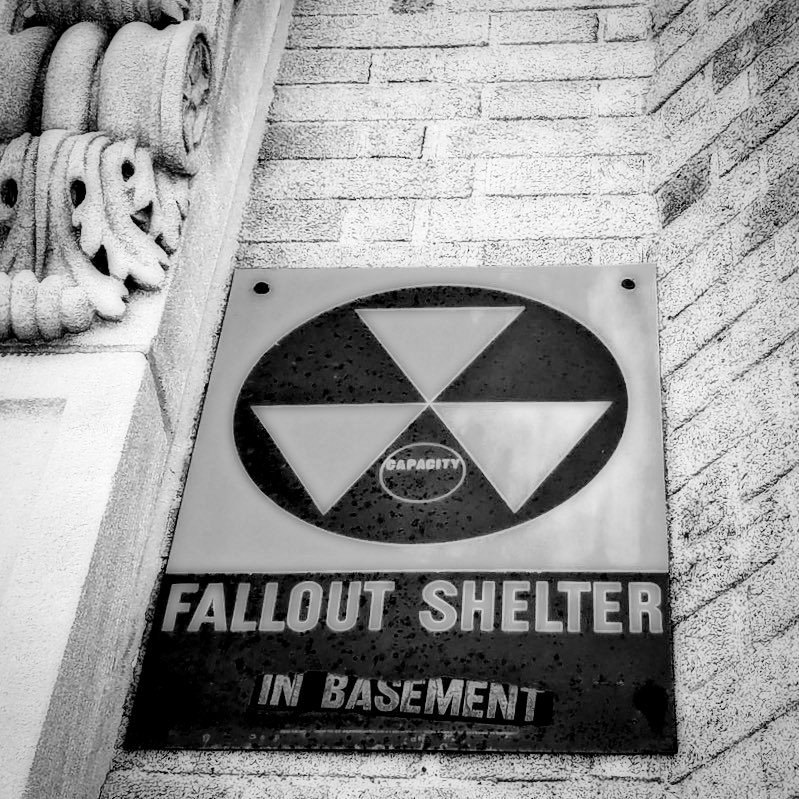 In the 1960s, they seemed to be everywhere. Churches, department stores, apartment

Signs were distributed by the United States Office of Civil Defense and marked the public fallout shelters for the general public to use should Russia drop “the big one.”

Growing up, I saw those signs daily yet it never occurred to me that they were actually designed by someone or that the six inner points actually were intended to convey a meaning.

Today, an article in The New York Times announced the passing of the designer of the fallout shelter sign.

The designer was Robert W. Blakeley.

Blakeley served as United States Army Corps of Engineers director of administrative logistics support. He created the sign in 1961 and the six points of his trefoil graphic signified:

1. Shielding from radiation;
2. Food and water;
3. Trained leadership;
4. Medical supplies and aid;
5. Communications with the outside world;
6. Radiological monitoring to determine safe areas and time for returning home.

According to the Times and Wikipedia, Major General Keith R. Barney tasked Blakeley

with creating the fallout shelter sign. Blakeley decided that the signs should be made from metal to be most durable, and needed to be easy to find in the dark. He chose to use orange-yellow and black, with an image created by graphic design firm Blair Inc. consisting of three upside-down equilateral triangles on a black background and the words “Fallout Shelter” in large letters. Blakeley also wanted the reflective paint to be visible from the glow from a light source as weak as that of a cigarette lighter.

His design was approved by Special Assistant to the Secretary of the Army Powell Pierpoint. Blakeley suggested a $700,000 production run, of one million interior signs by Alfray Products from Coshocton, Ohio and 400,000 exterior signs by Minnesota Mining and Manufacturing (3M).

Blakeley debuted the completed products at the Westchester County Office Building in White Plains, New York, on October 4, 1961. The signs became an icon for the anti-war protests and counterculture of the 1960s and were featured in popular culture, including Bob Dylan’s album cover for Bringing It All Back Home (1965).

Blakeley recounted a story about the time when his children were young:

“We’d go down the street, and one of the kids would say, ‘Hey, Dad, there’s one of your signs.’ But, you know, other than that it’s just like many of the other things that happen in life. It’s just like one of those routine things.”

Seeing Blakeley’s 14 by 24-inch signs of reflective porcelain on heavy steel sheet never became routine for me though. The early 60s was a time when we lived in great fear of nuclear war. As children in school, we were taught by a cartoon turtle named Bert to—should an atomic bomb fall—duck and cover.

As young as we were, and as hard as we practiced to duck and cover for safety, we somehow, collectively knew that if we heard a steady blast of 3 to 5 minutes from the Civil Defense horns that adorned the top of church steeples, streetlight poles, and government buildings that an attack on us was probable.

And then, should we hear a constant wailing tone or a series of short repeating blasts for 3 minutes, an attack was imminent—and we would surely die.