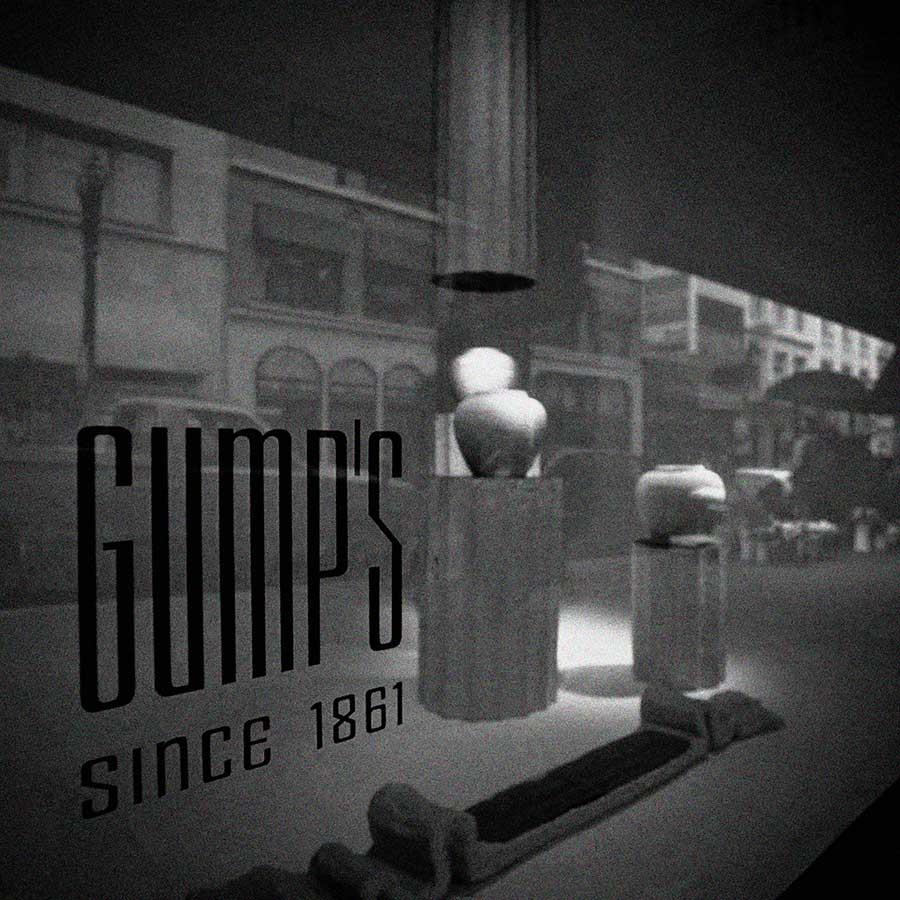 Their names are the stuff of legend. Every large city in every state had one or two, some cities hosted a handful. Through much of the twentieth century, major department stores like BamBurger’s in Newark, Marshall Field’s in Chicago, Bullock’s and Bullocks Wilshire in Los Angeles, Woodward & Lothrop and Garfinckel’s stores in Washington, DC ruled the retail scene.

New York City was host to many of the greatest and most memorable names in the industry. Among them: Best & Co., Ohrbach’s, Loehmann’s, Abraham & Straus, Bonwitt Teller, E.J. Korvette, B. Altman, Gimbels, and Alexander’s.

Baltimore was known for Gutman’s, Hutzler’s, Stewart’s, Hecht’s, and Hochschild-Kohn. Philadelphia was the home of Wanamaker’s, the store that helped introduce radios to the mass market.

old family-name badges. Not a single one of them had the impact on me that Gump’s on Post Street in San Francisco had. The first time I walked in I was mesmerized by their 18th Century, Qing Dynasty, giant gold Buddha.

The gilded wood Buddha was carved for a summer palace in Northern China and was a centerpiece of the store. It was carved in the Northern Manchurian Province of Jehol, the summer capital of the Qing Emperors in the early 19th Century. The piece was the largest of its kind outside a museum.

After more than forty years in business, the San Francisco fire of 1906 destroyed the retail store. A.L. Gump rebuilt and put his son, Solomon in charge. Later, Solomon handed over the reins to his son, Abraham Livingston. Abraham looked to the Far East for new inspiration, sending buyers to Japan and China to find exotic rugs, porcelain, silks, bronzes and jade.

Over the years, the Asian style of their offerings became a signature of the company along with their exquisite service, highest quality of merchandise—and extraordinary Christmas ornaments.

In the 70s I bought my first set of fine porcelain dinnerware at Gump’s. It was decorated in rich Imari style—orange, green, and gold against dark blue and white. It was manufactured for Gump’s by the Arita porcelain factory. Over the years, that set dwindled down to nothing by way of chips, cracks, and breaks until there were just a few pieces left. Those were tossed in a move from one place to another.

A couple of days ago, Jacob and I were talking and we remembered that dinnerware. The memories made us smile.

Jacob makes excellent Chinese food from scratch, so with Christmas coming, I decided to look at Gump’s online to see what they might have to replace that set. I wasn’t prepared for what I found.

Gump’s had declared bankruptcy. Their closing sale was being held by liquidator, Gordon Brothers in the same way as they might for the sell-off of an old factory, local shoe store, or a run-down mom and pop.

The San Francisco Chronicle writes, “Cate Murphy remembers visiting Gump’s in the 1950s and 1960s. Murphy, 71, who was born in San Francisco and grew up in Napa, would save up to buy exotic, high-end furnishings. Her friends did, too, especially when they got married.

“’Everyone used to register for their china and crystal,’ she said. ‘I spent my hard-earned salary on Christofle silver.’ Murphy remembers buying a bowl shaped like a lotus petal and a Chinese dowry wooden chest.

“’I splurged,’ she said. ‘Gump’s would also host puppies and kittens in the store for adoption through a partnership with the Society for the Prevention of Cruelty to Animals.’

“But now Murphy rarely shops at Gump’s. Her most recent purchase at Gump’s came last Christmas, when she bought an ornament for under $10.”

Forbes analyzed the closing and reported, “The retailer worked hard to make its physical store a destination. It kept a high-profile (and high-rent) presence in downtown San Francisco, and its store merchandising was a class act from top to bottom.

“So what happened? Gump’s simply lost track of its customer’s taste levels. It stuck with a painfully classic product mix that became irrelevant with the lifestyles of the people it had hoped would shop at the store.

“Look at luxury fashion companies like Gucci and Louis Vuitton. They appeal to the same demographic that Gump’s aspired to, but they realized their tired old products were no longer cutting it. Each has turned its design aesthetics upside down, staying true to its roots while becoming more modern. It’s a delicate balancing act that other fashion companies have struggled with.

“From all appearances, Gump’s never even tried. Paging through the company’s last catalog, you might have thought it was still 1977. It never changed.”

Change is good and necessary of course, yet change can be painful. When change means loosing a long-time, trusted friend, it can be really sad.

One thought on “Another legacy department store is closing. Gump’s San Francisco has been a destination for generations.”