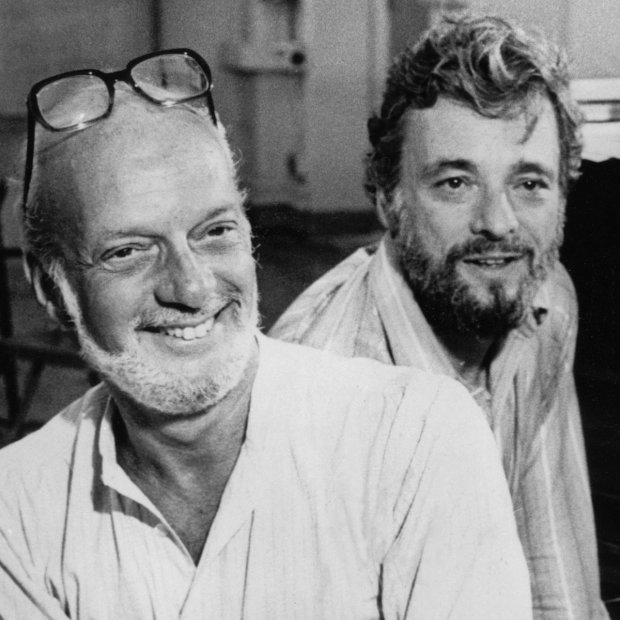 Since 1970, the Theatre on Film and Tape Archive (TOFT) has preserved live theatrical productions and documented the creative contributions of distinguished artists and legendary figures of the theatre. With the full consent and cooperation of the theatrical unions and each production’s artistic collaborators, TOFT produces video recordings of Broadway, Off-Broadway, and regional theatre productions, as well as dialogues between notable theatre personalities.

During the summer of 1975, theatrical giants Stephen Sondheim and Hal Prince sat down in front of video cameras at the Library for the Performing Arts at Lincoln Center (LPA) to discuss their individual careers, collaborative efforts, and the development of an idea into a finished musical production. The interview, conducted by writer and critic Brendan Gill of The New Yorker, offers insight into Company, A Funny Thing Happened on the Way to the Forum, Leonard Bernstein’s Candide, Rodgers & Hammerstein’s Allegro, Do I Hear a Waltz?, and others. Sondheim and Prince also examine their then-current show, still in development at the time, Pacific Overtures.

This showing of the Sondheim and Prince interview is the video’s digital debut and is part of LPA and TOFT’s ongoing series, “The Creative Process.” This marks the first time the video has been made available online, outside the walls of the Library.

I’m especially excited to see this conversation; on this blog, I’ve written about my connections with the original cast of Company.

The viewing is free, but registration is required. The presentation of the video on March 21, 2022 will be captioned. A Zoom webinar link will be emailed to registrants two days before the event, and again on the day of the program.

Prince died in 2019, and Sondheim died in 2021, both at the age of 91. This streamed interview coincides with what would have been Stephen Sondheim’s 92nd birthday.